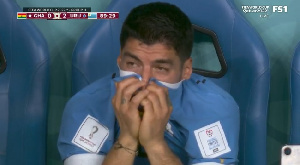 Some Ghanaian football fans were happy to see Luis Suarez shed tears after Uruguay exited the 2022 FIFA World Cup despite beating the Black Stars 2-0 in their final group match.

Luis Suarez broke the hearts of many Ghanaians and Africans as cleared Ghana’s goal-bound header off the line at the 2010 FIFA World Cup in South Africa.

Although many Ghanaians did not envisage Ghana losing the match to Uruguay, it appears Ghanaians are satisfied that Uruguay did not progress despite beating Ghana by 2-0

Giorgian de Arrascaeta’s two goals for Uruguay were not enough to get them through to the next round of the tournament as South Korea beat Portugal 2-1.

Reacting to the match, some Ghanaians on social media were happy that Luis Suarez and his team were unable to progress out of the group stages despite beating Ghana.

Below are some of the comments