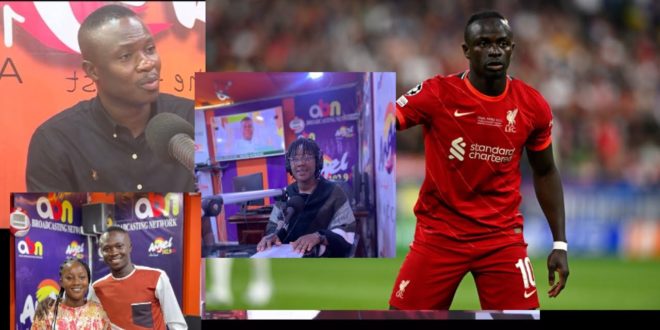 A Ghanaian female sports journalist, Joyce Annor Yeboah, popularly known as Afia Empress, has expressed her willingness to give up on her profession if that becomes an option for her to be in a relationship with a Senegalese-Liverpool Star, Sadio Mane.

During an interactive session on Angel floodlight Sports show, Miss Annor Yeboah was asked by her mentor, Saddick Adams, to be honest with him about what she will give out to have Sadio Mane because the former has been an admirer of the Liverpool Star.

“Tell me the truth and I’m giving you 10 seconds to think about it carefully before you respond. I’m talking to you as a father who’s giving out his daughter for marriage. Because of the things I’ve been hearing these days if you get Sadio Mane, will you marry him?”. Saddick Adams inquired.

In her response, Afia Empress noted “yes” and added, “but let me put on record, I like Mane not because of his money. However, I admire a lot about him and most especially his ability to stay off social media despite his achievements.”

She explained that she has always wanted to be with a man who is reserved, respectful, humble and most importantly serious about his career and Sadio Mane possesses those qualities.

In a twisted turn, Adams reminded her of Sadio Mane’s ideal woman; a God-fearing Lady and a Lady that can stay off social media.

“Will you be willing to delete your social media accounts as an option to be with the Liverpool Star?” Mr. Adams asked.

Without hesitation, Empress again said “yes, I’ll do that. We’re on social media because we need money and if my secret admirer will come for me with such an option, I’ll gladly let go of the noise on social media so that I can be with him.”

On the issue of their religious differences, Miss Annor Yeboah asserted that it won’t be a problem because “I don’t think none of my relatives will oppose me marrying a Muslim. Not even my pastor because it’s my life.”