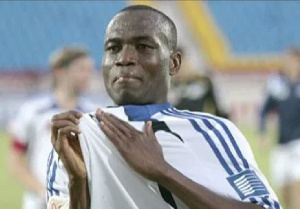 Ghana League money is for ‘hand to mouth’ – Shilla Illiasu

Shilla Illiasu joined the Porcupine Warriors from city rivals King Faisal in 2005 and played for a year before moving to Russian league outfit FC Saturn.

This was after he was selected as part of 4 local based players to make the Black Stars squad for the 2006 FIFA World Cup.

Shilla impressed at the Mundial and got several offers abroad including a trial stint with English Premier League side Arsenal before joining Saturn.

According to the former Ghana defender, its extremely difficult to survive in the local league. He believes local based players cannot build a future with their ‘hand to mouth’ salaries hence a move abroad matters most.

“The truth is one, in Ghana football you can never earn the money that these players are earning (abroad) even if you play 100 years in Ghana” he said.

“Because the Ghana League money is hand to mouth, if you want to build in Accra, Kumasi or even Tamale, your signing on fee from any team in Ghana, Kotoko, Hearts cannot even build any proper house”.

“So to me I will advise that, while playing in Ghana you pray that at least you get a better deal abroad in 2-3 years, so that you make money

Shilla Illiasu believes what the local league guarantees is the fame provided a player is performing.

“seriously in Ghana its just the fame, you will just enjoy media hype but at the end of the day, you’ll not make money” he noted.

Shilla Illiasu Alhassan is now retired and working on personal project in Tamale.

He was speaking in an interview with Accra based Asempa FM.