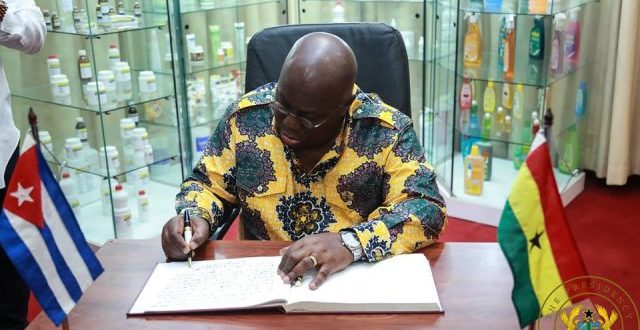 Ghana-Cuba cooperation to be extended to malaria eradication – Akufo-Addo

President Nana Addo Dankwa Akufo-Addo has said cooperation between Ghana and Cuba is being extended to the eradication of malaria, and soon, through a joint venture agreement with Labiofam S.A., a bio-larvicide factory will be established in Savelugu, in the Northern Region of Ghana.Nana Akufo-Addo further disclosed that an agreement is also being reached for the sale of Ghana’s cocoa liquor to the Stella S.A. chocolate factory in Cuba, and his government want to examine the possibility of Stella S.A. establishing a manufacturing facility in Ghana.Nana Akufo-Addo said these in Cuba on Thursday, 4 April 2019 when he visited the two companies, that is, Labiofam S.A., and Stella Chocolate Factory S.A.Mr Akufo-Addo arrived in Havana, Cuba on Wednesday, 3 April 2019 from the U.S.A where he delivered a lecture at the Institute of Politics, University of Chicago, met with Rahm Emanuel, former Chief of Staff to President Barack Obama and currently the Mayor of Chicago and interacted with members of the Ghanaian community resident in Worcester, Massachusetts.Source: Ghana/ClassFMonline.com