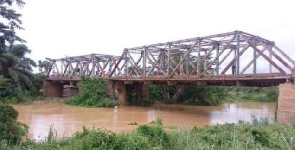 The Minister of Roads, Kwasi Amoako-Attah, has solicited the collaboration of the 48 Engineers Regiment of the Ghana Armed Forces towards the construction of 5,000 steel bridges to facilitate economic activities nationwide.

The ministry would soon enter into an agreement with the Defence Ministry to enable members of the Regiment to support the rehabilitation of about 150 steel bridge components that had been knocked down.

Amoako-Attah made this known at a staff durbar held at the Burma Camp, in Accra, during a visit by President Nana Addo Dankwa Akufo-Addo, to interact and listen to the concerns of both military and civilian employees of the Ghana Armed Forces (GAF).

The Minister said GAF had collaborated well with the Ministry in the past and the military personnel displayed a high level of professionalism, efficiency, discipline and technical prowess in the construction of steel bridges.

He announced last Friday, February 22, 2019, that government was expecting about 200 components of steel bridges from the Czech Republic this year to fix the dilapidated bridges.

He said due to this the Ministry would, therefore, like to rekindle that relationship and partnership towards the country’s infrastructural development.

Meanwhile, President Nana Akufo-Addo has presented 140 vehicles to the Ghana Armed Forces in fulfilment of an October 2018 pledge he made to the military.

The President also indicated that an additional 48 vehicles, representing the second tranche of staff and operational vehicles to the Armed Forces, would be presented soon.