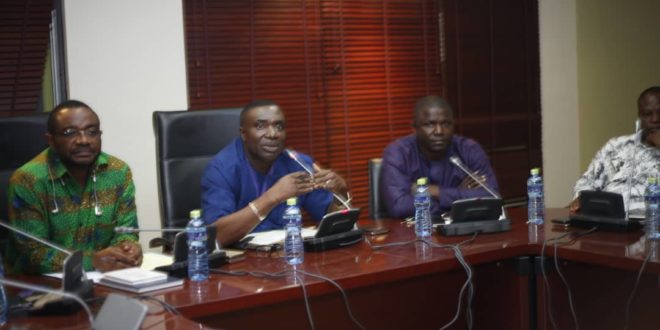 The Ghana League Clubs Association (Ghalca), Executives , the 16 Pemier League and Division one representatives have met the Parliamentary Select Committee on Youth, Sports and Culture to discuss the way forward for the leagues to begin.

The conference room was full with all sixteen (16) Premier league’s clubs and forty eight ( 48) Division one clubs well represented.

The Chairman of the Select Committee and also the Member of Parliament for Mpohor Constituency in the Western Region , Honourable Alex Kofi Agyekum welcomed all members and pleaded with them to soften their stands for the leagues to start since Ghanaians are yearning to see the return of the leagues soon.

The clubs after hearing the appeal from the Chairman softened their initial entrenched positions for a successful meeting.

In the case of the structured of the game they all conceded that it has already been agreed on with the Normalisation Committee.
Concerning the Regulations , the appellate body proposed a Committee with 2 representatives each from Premier and Division one clubs with Ghalca Chair to sort out within forty eight ( 48 ) hours .

The clubs proposed 5000 GH each for the Special tournament which initially was not agreed by 14 Premier clubs , but the Committee told them it will not be possible but all the same the Parliamentary committee directed the sub commute to sort it out .

All the clubs have now agreed to take part in the special tournament and are ready for the fixtures this weekend and expect to hear the date of the competition which it was proposed that midweek matches should be played to make up the lost games.

Many of the clubs reps commended the committee and it’s Chairman Honourable Alex Kofi Agyekum for their wisdom in inviting stakeholders to such meeting without which Ghana football will never has seen the light of the day.