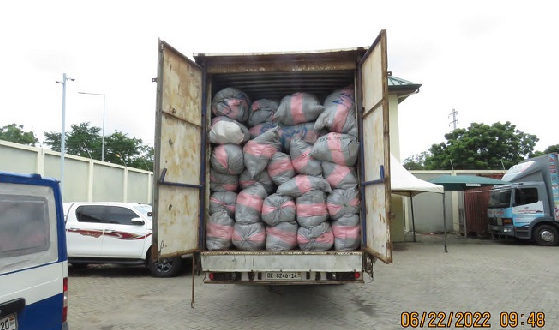 A joint security operation has led to the interception of 17,522 slabs of cannabis with street value of GH¢17,522.000 at Ho in the Volta Region.

The drugs with a total gross weight of 8,761 kilogrammes were seized between AdakluTrekpe and Ho Sports Development Centre.

The operation was conducted by the Volta Regional Office of the Narcotics Control Commission(NACOC) with the support of National Security operatives and Military officers from the 66 Artillery Regiment of Ho.

The acting Director of Public Affairs and International Relations of NACOC, Mr. Francis OpokuAmoah, disclosed this to the Ghanaian Times in Accra yesterday.

He stated that three weeks ago, the team intercepted a Renault cargo truck with registration number GE 8246-14 loaded with poly sacks containing dried leaves suspected to be Indian Hemp, which is an illegal substance.

Mr. Amoah stated the truck which was heading out of Ho, was intercepted between AdakluTrekpe and Ho Sports Development Centre.

He said a search conducted on the truck revealed a total of 222 sacks, containing 17,522 slabs of cannabis with a total gross weight of 8,761kg.

Mr. Amoah stated that the operation was conducted after weeks of surveillance and intelligence gathering by the NACOC officers in the Ho enclave.

“Similar operation was conducted some weeks back in Woe, Keita which also resulted in seizures,” he added.

The acting Director said the truck driver upon seeing the security officers abandoned the cargo truck and bolted.

He said further investigations were ongoing to identify the owner of the truck.

Mr. Amoah said the passage of the Narcotics Control Commission Act 2020, (Act 1019) does not in any way legalise or decriminalise the possession, use and traffic in cannabis in Ghana.

He said the Act 1019 only permits the Minister of the Interior to grant license to cultivate cannabis which has not more than 0.3 percent THC, a main active ingredient of cannabis content for industrial and medicinal purposes and not for recreational purposes.

Mr. Amoah gave the assurance that the commission would continue to work relentlessly to protect the people of Ghana, especially the youth from the harmful effect of drug use. 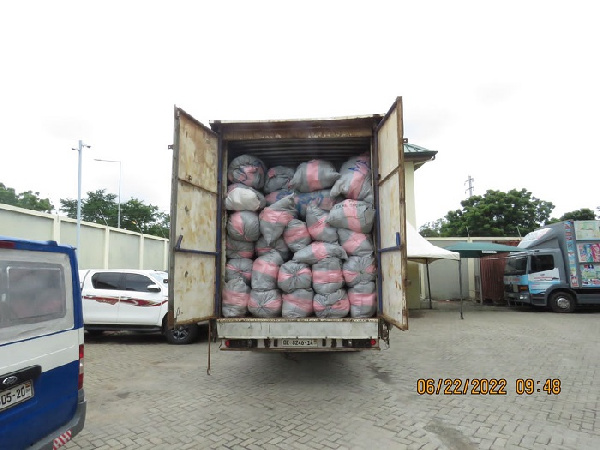