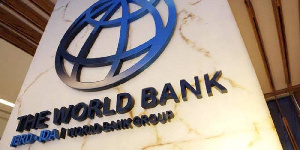 International financial institution, World Bank, has threatened to initiate legal action against the government of Ghana within 30 days if it fails to submit audited financial statements on the Ghana Accountability for Learning Outcomes Project (GALOP).

Pierre Laporte, the World Country Director to Ghana, in an October 21 letter addressed to Finance Minister Ken Ofori-Atta expressed concerns over the delays of the audit statement within the stipulated six months after the end of one fiscal year per the financial agreement between the International Development Association and Ghana.

Owing to the fact that the submission of the statement is four months overdue, the World Bank says it will explore the “possibility of exercising the appropriate legal remedies under the Financing Agreement” against the government.

“In accordance with Section 5.09(b)(ii) of the General Conditions incorporated by reference in the Financing Agreement and as specified in paragraph II (ii) of the Disbursement and Financial Information Letter (DFIL), the Recipient is required to furnish the audited financial statements covering the period of one fiscal year of the Recipient no later than six (6) months after the end of such period. We note that as of today, October 18, 2022, the Association has not received the audited financial statements for the year ending December 2021 in compliance with the General Conditions.

“The Association is concerned that it is almost ten (10) months after the year ended and an independent audit report on the use of funds has still not been furnished to the Association.

“Given that the audited financial statements are now four (4) months overdue, and with the Audit Compliance Guidance, we write to inform you that unless you come into compliance within the next thirty (30) days from the date of this letter, the Association may have no option than to explore the possibility of exercising the appropriate legal remedies under the Financing Agreement,” part of the letter read.

Pierre Laporte has consequently requested Ofori-Atta to attend to the brewing matter in order for the audit requirement to be adhered to.

“We trust that your personal and immediate attention to this matter will ensure speedy compliance of the audit requirements referred to above,” the letter said in part.

Education Minister Dr Yaw Osei Adutwum in May this year was allegedly caught up in an alleged phantom training exercise for over 40,000 teachers on the digital literacy platform under GALOP for which World Bank had given $1.2 million.

This came to light after then Director General of the Ghana Education Service (GES) Prof Kwasi Opoku-Amankwa, in a March 30, 2022 letter to the Education Minister said GES was “unaware that any such training has taken place” and further asked him “to advice and provide direction to enable the GES to respond appropriately to the enquiries from the World Bank”.

According to a myjoyonline.com report, the World Bank has written to the then GES D-G after Dr. Yaw Osei Adutwum failed to respond by close of January 14, 2022, on queries into whether or not the training had taken place and claims by Chief Director at the Education Ministry, Benjamin Gyasi, that it has “exceeded the target of 40,000 teachers to be trained, insisting PBC7.2B has been achieved.”

But responding to concerns that the minister had submitted a fictitious report on the training, Press Secretary of MoE, Felix A Baidoo, in a statement flatly denied it claiming it was a smear campaign against the minister.

“Unfortunately, however, it is now clearer than before that those behind such character assassinating reports are deliberately embarking on a vicious smear campaign project against the patriotic, selfless and hardworking Minister of Education, Dr. Osei Adutwum, for reasons best known to themselves,” it said.

Read the letter from World Bank addressed to Ofori-Atta below: 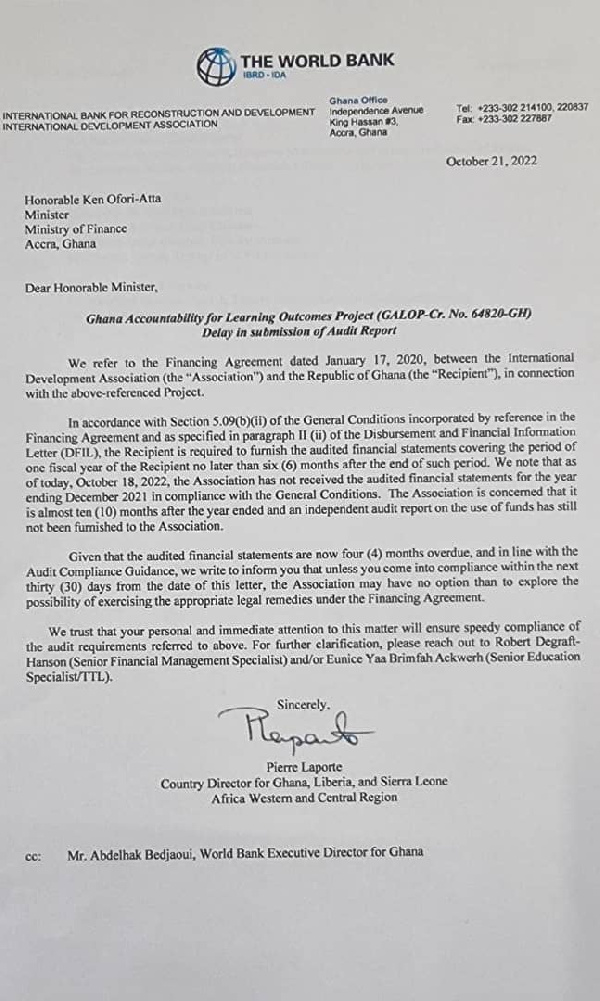