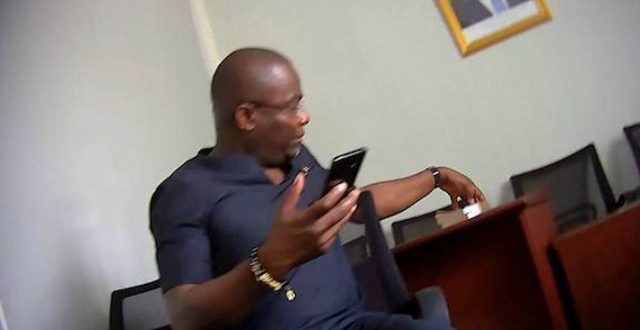 The Office of the Special Prosecutor has started investigating the embattled Secretary to the Inter-Ministerial Committee Against Illegal Mining, Mr Charles Bissue, for allegedly engaging in bribery, as captured in documentary compiled by investigative journalist Anas Aremeyaw Anas.Anas was at the Office of the Special Prosecutor with his lawyer, Mr Kissi Agyabeng on Wednesday, 8 May 2019 to assist with investigations into the matter.Mr Bissue was secretly captured receiving cash to allegedly facilitate the speedy ‘clearance’ of ORR mining company in order that it can begin mining without due process.He was heard in the video titled ‘Galamsey Fraud’, instructing his subordinates over the phone to “fast-track” the processing of the phoney company’s documents.Mr Bissue stepped aside as secretary to the committee to allow due process to take place but claimed he was innocent of the allegations.“I would like to state, at the very outset, that I am innocent of the allegations levelled against me in the documentary, as I was not and have not been engaged in any acts of corruption, criminality or misconduct,” he said in a statement on 1 March 2019.Source: Ghana/ClassFMonline.com