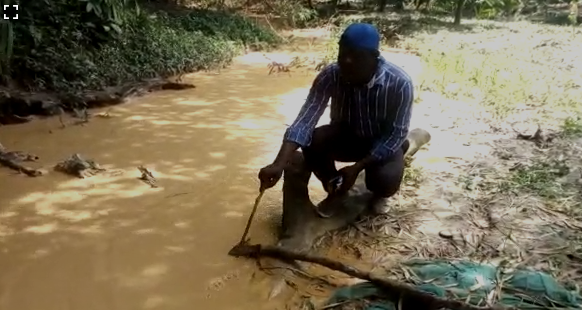 The people of Akyem Hemang in the Fanteakwa South District of the Eastern Region of Ghana are in tears over the virtual drying up of the only river that serves as a source of water for the whole community.

The Akrasu River which serves three communities including Dome, Gyampomani and Hemang is gradually dying out due to the activities of illegal mining ‘Galamsey’ in the communities.

A tour around the River revealed its brownish state of color and shallow depth.

The Founder AEA Village Foundation, Kwame Adu who took some media personnel on tour to round the River indicated that the situation is becoming unbearable for residents who struggle on daily basis to access good and portable drinking water.

He said in an interview that, much is needed to nib the activities of illegal mining in the bud so as to sustain the river bodies and improve the health of the people.

According to Kwame Adu it is unfortunate that Akrasu River which is a major source of drinking water in Fanteakwa South District of the Eastern Region of Ghana will eventually dry up due to mining.

He said rivers and streams that are the major source of drinking water for all year round for these residents must be protected, hence government must ensure that it steps up its efforts to clamp down on illegal mining activities.

On his part, the Assemblyman of Akyem Hemang, Mr. Yaw Johnson who is also peeved with the way things are going indicated that the government must take responsibility for the situation because it is a government that issues permits for outsiders to come and mine in the areas which is now affecting them.

He said for the past 10 years they never experience their rivers and streams drying up and that situations currently is making life unbearable for the people who find it difficult to get water for drinking and for cooking.

He however indicated that attempts by the DCE to ensure that the activities of illegal miners are stopped remain futile.

He pleaded with government to come to their aid.