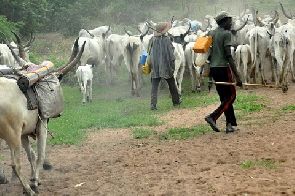 A Nomadic Fulani has killed a 38-year-old man, Asabil Asawe at Asatoase near Kowireso in Agogo stool lands of the Ashanti Region.

According to the District police commander of Asante Akim North ASP James Ameka, the deceased was working in his sugar cane farm on and was shot by the Fulani herdsman at his lower abdomen resulting in his death on arrival at Agogo Presbyterian hospital on Sunday.

Jacob’s son is the one killed by the herdsmen and his body has been deposited at Agogo Presbyterian hospital morgue.