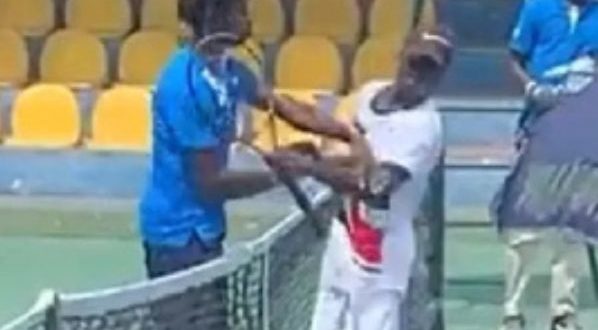 Share
What was supposed to be a routine handshake after a tennis game turned out to be an ugly scuffle when French tennis player, Michael Kouame, slapped his conqueror, Raphael Nii Ankrah, after their first round match at the ITF Junior tournament at the Accra sports Stadium.

Kouame, who was the No. 1 seed at the competition, rallied back in the 2nd set to force a decider, after losing the first set 2-6 to Ankrah.

A tense final set saw the the Ghanaian claim  7-6 win after a tie break and eliminated the Frenchman 6-2 6-7 7-6 in the first round.

As both players approached the net for the customary handshake, Kouame, reached out and slapped Ankrah, much to the surprise of those present.

The incident was immediately reported to the ITF, who swiftly disqualified the player from the competition.

Henry Boni-Quarshie, who is a board member of the Ghana Tennis Federation, the host of the tournament, confirmed the disciplinary action to Citi Sports.

“The tournament organisers reported the incident to the ITF, who have taken swift action on the matter.

“Kouame was defaulted as a result of his actions, and will not take part in the doubles competition,” he said.

Kouame, who was already out of the singles tournament, after defeat to Ankrah, has been kicked out of the doubles competition, where he was also set to compete.

Ankrah, however, will face countryman Nii Nortey Dowuono in the second round.