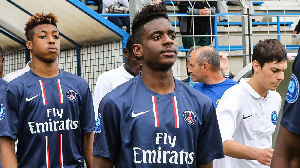 The right-back played alongside the likes of Presnel Kimpembe and Kingsley Coman during his time as part of the youth structure at the Ligue 1 club before leaving in 2015.

After moving to Switzerland to play for FC La Chaux-de-Fonds, Diakiese joined Croatian side NK Rudes before heading back to France to play for AS Furiani.

And the fifth-tier side confirmed the news of Diakiese’s death on Friday, tweeting on their official account: “Our club is in mourning today. It’s with deep and immense sadness that we’ve learnt of the death of our player Jordan D, 24, yesterday afternoon in Paris.

“After arriving last July, this amazing kid was a winner both on the pitch and beyond. Always smiling, discreet, hard-working, he settled in very quickly.

“The whole Furianinca family is reeling from the news. The staff, Jordan’s team-mates, as well as all the directors and volunteers have been hit hard.

“Our thoughts are, first and foremost, with his family, friends and loved ones. Rest in peace, Jordan. You’ll always be a Furianincu lion.”

While he didn’t make a senior appearance for PSG, Diakiese played in the UEFA Youth League in the 2013-14 season, helping his side reach the quarter-finals of the competition before they were knocked out by Real Madrid.

The Ligue 1 champions also posted a note of condolence on their social media pages as they expressed their sadness and well-wishes to their former player’s family and all those associated with AS Furiani.

They wrote: “We will never forget you, Jordan.”

The post continued: “Born in Paris and arriving at the club academy at 13, Jordan Diakiese left only good memories with his coaches and team-mates. We learnt about his death today at the age of 24 with great sorrow.

“PSG offers its condolences to his family and friends, and to his club.”