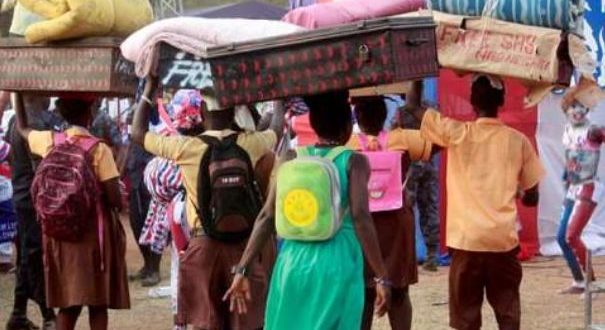 Share
Barring any last minute intervention by government, Senior High Schools under the free SHS programme could be shut and students sent home.

This is a result of the poor food supply situation in the schools which is said to have reached dire and deteriorated levels, according to students, teachers and headmasters who have pleaded anonymity to this portal.

Government through the Ministry of Education is said to be owing food suppliers to the tune of almost GHC800 million.

Our painstaking investigations have revealed that the situation started worsening about a year ago when food suppliers decided to offer the schools food in bits when their bills for outstanding payments started piling up.

“There are 18 different commodities of food our suppliers are supposed to give to us. They will give you some and promise to deliver the rest later, and even that you do not get these items in their right quantities. So we started asking questions, and we realized it is because government has not paid them for previous supplies”, one school head told this portal.

Food shortage in Senior High Schools has become widespread with some threatening consequences.

“We all know food is a security issue. A hungry student is an angry student. Due to the poor nature of the food situation, we are always on alert to quell threats of violence, agitations, demonstrations which can jeopardize a peaceful environment needed for teaching and learning”, an aggrieved Headmistress stated.

Apart from the threat to security the situation poses on various campuses, students have been compelled to engage in poor eating habits lately. “To get our stomachs filled to enable us do some learning, we have no choice than to consume anything mixed for us in the name of feeding”, said one second year student at high school in the Ashanti Region.”

In the words of one teacher, “….the stable, peaceful atmosphere required for teaching and learning is seriously threatened by the lack or no food chorus we hear in our schools these days. And the earlier action is taken the better for all the stakeholders”.

Our investigations revealed that government is working on releasing some amounts of money to the National Food Buffer Stock Company to pay suppliers but there are fears among a section of suppliers we spoke to across the country that the amount may not be enough to settle all arrears.

“Government owe us so much but you will be there and receive a call to come for a cheque. When you go, the amount is not what can even offset even 10% of your outstanding bills and that means, you take that money but still cannot supply food to the students”, a Koforidua-based food supplier told me.

“We do not know how much government owe the food suppliers but if the ministry of education or finance is unable to clear the debt for the suppliers to resume supplying and the situation persist, we will have no choice but to close down the schools”, an official of the conference of the heads of assisted secondary schools (CHASS) said.

Since last year, the leadership of CHASS, GNAT, CTU AND NAGRAT have had cause to raise concerns about food shortage situation in senior high schools and expressed fears the situation could affect the health of students and make the schools unstable for teaching and learning.

It is yet to be known if the latest threat could compel government to take urgent necessary actions.

Attempts to get reactions from Buffer Stock, Ministry of Education, Ministry of Finance and Ghana Education Service were unsuccessful.