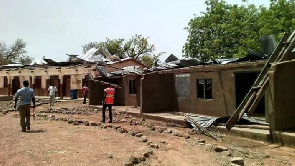 Two people have been killed in Dasongo and Busongo, two neighbouring communities in Sirigu in the Kasena-Nankana West District of the Upper East region following a heavy rainstorm on Tuesday night, MyNewsGh.com has confirmed.

The rainstorm which swept over the area and several parts of the Upper East region also left behind ripped houses, collapsed buildings, uprooted trees among other destructions.

MyNewsGh.com sources in the community say the two, a child identified as Awungba Salamatu, age 5 and a 45-year-old security man identified as Alo Kofi met their untimely death when they were slashed by flying roofing sheets and other heavy objects.

At the time of filing this report, sources said the child was being prepared for burial.

This is the second rainstorm that has hit communities in the Upper East region in the beginning of this year’s raining.

Meanwhile, electricity poles belonging to the Electricity distributor NEDCO have not also been spared as hundreds of poles were pulled down by the winds causing power outages in several parts of the region.