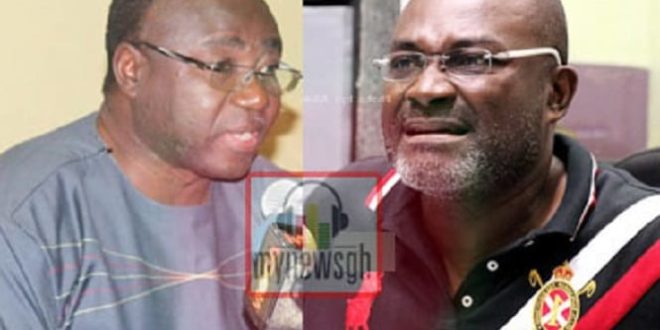 Controversial lawmaker for Assin Central Constituency, Kennedy Agyapong in August last year mounted a spirited defense for his friend, Adjenim Boateng Adjei who was nabbed in the sale of government contracts to the highest bidders.

Mr. Agyapong who disagreed with the widely held perception the man has denigrated his office as Chief Executive Officer (CEO) of the Public Procurement Authority (PPA), insists he is clean but that the journalist, Manasseh Azuri Awuni is evil.

Speaking on Boling Point in Accra monitored by MyNewsGh.com, the loudmouth politician will not join in the bandwagon of Ghanaians criticizing the man he says no nothing about the dealings in his private company, Talent Discovery Limited (TDL).

“He is clean and I will say he has not done anything wrong as some of the NPP members are saying calling for his crucifixion. It is rather Manasseh Azuri Awuni who is evil because this is a man he has been going to take money”, he disclosed.

According to him, the embattled PPA boss was not directly linked to the daily operations of the private company by virtue of his tight schedule in his new capacity.

“How do you accuse a man who is not running the day-to-day affairs of a company he left years ago of conflict of interest and some of you NPP people are hailing corrupt  Manasseh for the investigations”, he asked.

A documentary by Investigative Journalist Manasseh Azuri Awuni titled “Contracts for Sale” premiered last Wednesday captured the PPA Boss’ own company under the name Talent Discovery Limited incorporated in June 2017 which has won a number of government contracts through restrictive tendering.

From excerpts of the 46-minute documentary, it also emerged that the company was engaged in the sale of contracts and was ready to sell one worth a ¢22.3 million to a non-existent entity during undercover investigation.

The Ministries, Departments and Agencies (MDAs) have confirmed that the contracts being sold by Talent Discovery Limited are authentic contracts that have been awarded to the company. The company has had contracts with the Ghana Water Company (GWCL), Ghana Cocoa Board (Cocobod), Ghana Ports and Harbours Authority (GPHA).

The Commission for Human Rights and Administrative Justice (CHRAJ) has since confirmed findings made by the invstigative journalist and referred the matter to the Economic and Organized Crime Office (EOCO) for further investigations.