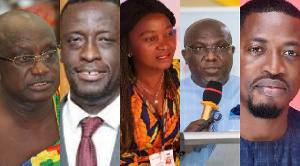 President Nana Addo Dankwa Akufo-Addo has reportedly ordered five regional ministers to appear before him over the menace of illegal same-scale mining (galamsey) happening in their regions. allegedly

Captain Smart said that the ministers were ordered to appear with Metropolitan, Municipal and District Chief Executives (MMDCEs) whose jurisdictions are being used for galamsey activities, onuaonline.com reports.

The journalist also alleged that Members of Parliament (MPs) from the two leading parties in the country, the National Democratic Congress (NDC) and the New Patriotic Party (NPP) are ‘galamsey’ financiers.

“18 MPs in Ghana are doing galamsey. 10 of them are NPP and the remaining 8 are NDC,” he is quoted to have said on his Maakye Show on Onua TV.

He added that some big wigs in the NPP are also involved in illegal mining activities.

Meanwhile, the Minister for Lands and Natural Resources, Samuel Abu Jinapor, has directed the Forestry Commission to cease the operations of Akonta Mining Company in the Tano Nimiri Forest Reserve of the Amenfi West Municipal Assembly.

According to a statement issued by the Public Affairs of the Ministry on Friday, September 30, 2022, the Company owned by the ruling NPP Chairman for Ashanti Region, Antwi Boasiako, alias Wontumi, has been engaging in mining activities in the forest without a permit.

“The attention of the Ministry of Lands and Natural Resources has been drawn to publications about certain operations by Akonta Mining Limited in the Tano Nimiri Forest Reserve in the Amenfi West Municipality in the Western Region.