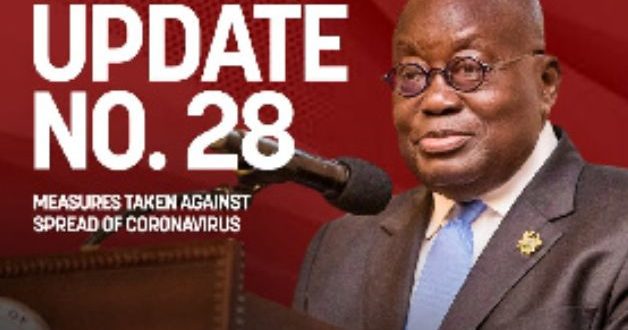 Share
Ghana closes land and sea borders due to COVID-

President Nana Addo Dankwa Akufo-Addo is expected to, today, Sunday, March 27, 2022, give his 28th Address to the Nation on measures aimed at managing the spread of COVID-19.

As announced by the Minister for Information, Kojo Oppong Nkruamah recently, the President will tonight announce the date for the reopening of Ghana’s land borders and the modalities guiding same.

Ghana’s land borders have remained shut to human traffic since the COVID-19 pandemic hit the country in March 2020.

The decision to finally open the land borders after the country’s international airport was reopened last year, was reached at a cabinet meeting chaired by the president last week.

According to Kojo Oppong Nkrumah, the president, as part of his address tonight, will also announce some changes in the protocols currently in place at the Kotoka International Airport for checking the importation of COVID-19 cases.

Ahead of the president’s address however, there have been several calls for the suspension of the existing $150 mandatory PCR Rapid Antigen testing fee being demanded from arriving passengers at the airport.

Minority members of Parliament have already served notice of a planned picketing at the airport in protest of the $150 testing cost.

“Pursuant to the Public Order Act, 1994 (Act 491), we the undersigned Members of Parliament on behalf of our Caucus and the Ghanaians we represent, duly notify your office of our irrevocable intentions to lead a series of picketing actions at the Kotoka International Airport from Wednesday the 30th of March, 2022,” the minority said in a statement cosigned by three of its members

The statement again said, “we are further resolved to converge on the precincts of the Airport from 2pm to 6pm each day”.

Previous Arthur K explains how he was chased out 6 months to his graduation at UGMS
Next Watch Dennis Odoi, Afena-Gyan, Korsah perform Black Stars initiation dance