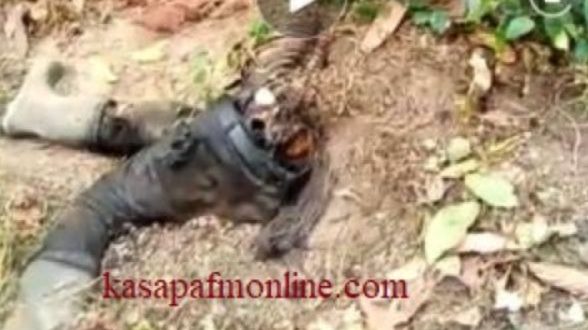 The deceased has been identified as Kofi Koranteng popularly known as Agenda who hails from Larteh in the Eastern but until his death was a farmer at Assin Akortey No. 2.

An eyewitness who doubles as Assemblymember of the area, Mr. Tetteh Robert in an interview said he owed the deceased some amount of money but had not had a glimpse of him for weeks so he decided to go search for him in his village only to discover his mortal remains with the skull dislocated and lying about 15 metres away, and one hand also missing.

Mr. Tetteh said the residents suspect the deceased was murdered by an unknown assailant.

Though the cause of the death is not known immediately, they suspect one Emmanuel Tetteh who 3 days before the demise had a misunderstanding with the deceased over a piece of land which resulted in a scuffle with the deceased.

The suspect and his family including school children have left the village leaving his undried cocoa beans behind.

Mr. Tetteh said the incident has left residents gripped with fear as farmers and market women have remained indoors while children are also refusing to go to school or go on errands.

He, therefore, called on the police to expedite investigation to ensure perpetrators face full rigours of the law.

Meanwhile, the Assin Fosu District police Commander, Chief Superintendent Cephas Arthur confirming the incident said, the remains have been sent to St. Francis Xavier Hospital Morgue for preservation while a formal investigation has been launched into the matter as forensic analysis will be conducted on it to confirm whether he was murdered.

Previous Teachers shut down school over a mentally challenged woman’s attack on them
Next 2 arrested, BMW SUV seized after robbers flee with ATM