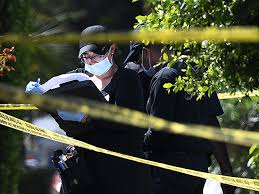 Farm manager killed and tied to a pole

A 21-year-old farm manager in the Free State was found murdered and tied to a pole on Friday morning, police said.

Police spokesperson Brigadier Motantsi Makhele said Brendin Horner was found in an open space in Paul Roux at about 06:30.

He was the farm manager of De Rots.

According to police, he was tied with a rope around his neck to the pole.

A knife was found near the scene.

He had serious injuries on his head and face.

His Toyota Hilux was found abandoned and with bloodstains near Duikfontein Farm in the same area.

The motive for the killing is not know yet, but Makhele said police were appealing for information to help with their investigation.

Jan van Niekerk, provincial Freedom Front Plus leader, said crimes such as Horner’s murder could only be effectively combated if the government admitted that they were serious, in the first place, declared them to be priority crimes, and establishing specialist units tasked with ensuring rural safety.

It called on the agricultural community to join their local safety and security structures and encouraged farmers to safeguard and defend themselves.