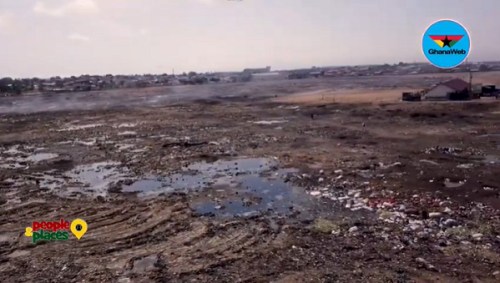 Chiefs of Fadama have indicated plans to initiate legal action against the government over their failure to compensate them for the ‘takeover’ of their lands.

According to them, they have, for years, been chasing government for a dialogue on issues pertaining to land ownership.

They claim the Old Fadama land belonged to their grandfather – Chief Imam Abass – The first settler on the land.

Speaking to GhanaWeb on the People & Places show, the current chief of the area, Sarki Ridwan Muktar Abass told Wonder Ami Hagan that the people of the community had to move from Old Fadama to its current settlement – New Fadama owing to the waterlogged nature of the place.

He noted that their grandfather after consulting the first president, Osagyefo Dr. Nkrumah moved, with his help, to New Fadama.

Though an indenture signed in 1935 is available to that effect, he noted that processes to document and make them the rightful owners of that land failed to proceed after Dr. Nkrumah was overthrown.

Since then he says, leadership of the community has tried through all possible means to secure the documents to the effect that they own the land and get compensation for it accordingly, all to no avail.

He, therefore, said the next line of action may be a stronger one – legal action against government.

“We are deciding to take the government up – to sue the government. Old Fadama is our land, our grandfather bought it. I told you where the indenture is but as at now, we have not got the documents for Fadama. Osagyefo Dr. Kwame Nkrumah started working on it and they overthrew him. Since then, we’ve been chasing the documents of Fadama, I don’t know why they don’t want to give us the documents but they have not been fair to us. Is it because we are Muslims? Is it tribalism? Why are they trying not to give our documents to us?

“We have been chasing, the chief Imam has written letters. Even as I’m talking to you, there’s a letter that has been sent to the authority.
“If we get to a certain point, we have to take legal action against the government as leaders of the community. Why are they trying to deprive us our rights,” Chief Abass said.

Meanwhile, the Accra Metropolitan Assembly, under the leadership of its former Boss, Mohammed Adjei Sowah began the demolishing of some structures along the Korle Lagoon in 2020, as part of efforts to protect the Korle Lagoon Restoration Project and to green the area as part of the ‘Greening Ghana Agenda’.

This has seen several illegal structures being demolished and hundreds of persons becoming homeless.

Find out more fascinating details about Fadama in the video below: