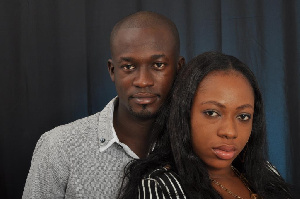 Wife of the Acting Director of Communications at Ghana’s seat of government, Gloria Assan Arhin has withdrawn some claims she initially made in a divorce suit with regards to properties supposedly owned by her estranged husband.

In an amended petition filed at the Accra High Court on Monday, February 15, 2021, Gloria Assan Arhin claims that there is only one property in contention, which is an uncompleted 5-bedroom house in Santor in the Kpone Katamanso District.

Some other properties she claimed belonged to Eugene Arhin have been removed in the amended petitions.

The amendment comes after Eugene Arhin filed a response to the petition made by his wife, asking her to prove claims she made in her first petition.

Eugene Arhin, in his response, denied most of the claims, while admitting that he wanted to leave the marriage.

He also denied having any property at Senya Bereku or AU Village as well as at Ada Foah and Teshie as initially submitted by his wife.

Previous Fire Guts 10-Bedroom House In Bantama
Next VIDEO: Story of the largest and oldest mango tree in Bono Region