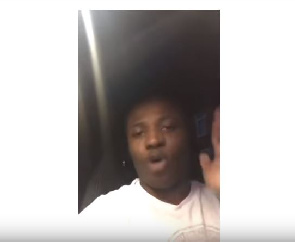 According to the man only known as KOD, EOCO is aware of the pending fraud case which led to the arrest of NAM1, who he claims is innocent of the crime, late last year.

A background to the accusations by KOD as reported by the Herald newspaper stated that, “Dubai-based gold dealership company, Horizon Royal Diamonds DMCC, had been in contact with officials of the EOCO to get two alleged fraudsters; a Ghanaian and Nigerian, who had used a phony company “Just Gold Company Limited” to defraud the Emiratis the sum of US$51 million, arrested and prosecuted.

KOD further alleged that NAM1 has been in Dubai cells since December 4, 2018, because Ade, one of the owners of Just Gold Ghana Limited, had said NAM1 was a staff at his company.

In a viral video on social media, he (KOD) explained that NAM1 had travelled to Dubai with the hope of collecting some money owned Menzgold by Horizon Royal Diamonds DMCC, for the supply of gold.

“His intention was to use the money to settle investors of the Menzgold, following the closure of the company by the Security and Exchange Commission (SEC).” He indicated.

He said part of the money passed through Sierra Leone before reaching the shores of Ghana.

Daring EOCO, he was confident that the law enforcement was covering up for one of the partners of Just Gold Ghana Limited because he is an affluent person in Ghana.

Hence if something should happen to him, he has already given details of the suspect and some officials involved in the mess to management at his company in the United Kingdom.

He angrily stated, “Should something happen to me, EOCO and the unidentified person, who has been allowed to go scot free, should be blamed. I have given all the details to management at my workplace. I know when he moved to a foreign country. I won’t mention any name. They know themselves.”

He has, therefore, asked Ghanaians to question the EOCO about the whereabouts of the monies released by the Dubai-based company.

In a statement signed by Jacqueline Avotri, Public Affairs Director of the Office, the Office described the video as “malicious and slanderous.”

The Office said at no time did K.K. Amoah nor any member of staff receive any gifts from the embattled CEO of gold dealership firm, Menzgold, Nana Appiah Mensah.

“The video is malicious and slanderous with the aim of destroying the image of the Office and the reputation of the Executive Director. The supposed brother (KOD) of Nana Appiah Mensah has no basis for his allegations. We wish to state clearly that statement is totally false,” the statement said.

The statement is in response to a video which has gone viral by one KOD who alleges that EOCO and its head has no moral right to seize the assets of Nana Appiah Mensah aka NAM1.

This was after the Office froze the bank accounts of NAM1 and proceeded to also seize all other assets.

But the EOCO denies this saying neither Mr Amoah nor any member of the staff “has in no time received cash of any denomination, nor mobile phones, nor 4×4 Land Cruisers from Nana Appiah.”

According to EOCO, the freezing of assets belonging to the gold dealership firm and its associated companies has incurred the wrath of beneficiaries of the assets which might have prompted such action.

“The video and its alleged content will not deter the Office from retrieving and preserving the assets owned by Menzgold and its Associate Companies,” it said.

Economic and Organised Crime Office assures the public that it has a duty to perform and would continue to secure the assets of Menzgold and its associated companies in accordance with its mandate as confirmed by the court.