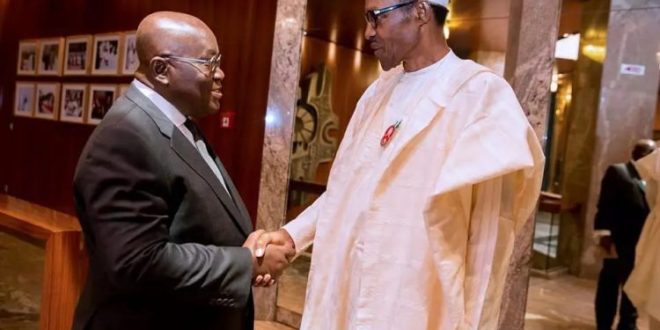 Ghana’s President Nana Akufo-Addo who doubles as the Chairman of ECOWAS has called for calm in Nigeria following the chaos that has erupted between protestors and security officials.

President Akufo-Addo who has been criticised for his seeming silence since the anti-police brutalities started in the Western African nation said: “I join all well-meaning persons in calling for calm, and the use of dialogue in resolving the #EndSARS impasse in Nigeria.

“I have spoken with President Buhari, who is committed to this end and has begun the processes that will lead to reform. Violence, be it on the part of the Police or protesters, cannot be the solution. To the families who have lost their loved ones, I express my sincere condolences, and I wish the injured a speedy recovery”.

Meanwhile, the ECOWAS Commission has called on security forces in Nigeria to exercise restraint in their engagement with protestors who have been on the street for days over police brutalities.

The Commission has also urged the protestors to be peaceful in their demonstration.

The statement comes in the wake of calls on ECOWAS President Nana Akufo-Addo to comment on the chaos in Nigeria. Some Ghanaians have also taken to social media to criticise the President for his silence since the chaos.

“ECOWAS Commission notes with concern that demonstrations by Nigerian youth calling for police reform, particularly the abolition of the Special Anti-Robbery Squad (SARS) of the Nigeria Police, accused of misconduct by those demonstrating, have turned violent. ECOWAS Commission expresses its condolences to the families and friends of those who have lost their lives during the protests and wishes the injured a speedy recovery.
While ECOWAS Commission recognizes the right of citizens to freedom of expression and peaceful assembly and protests, it is also of the view that those rights should be exercised in a non-violent manner.

“In this regard, ECOWAS Commission calls on all protesters to remain peaceful in the conduct of their demonstrations. It also urges the Nigerian security operatives to exercise restraint in the handling of the protests and act professionally,” the statement signed by the ECOWAS Commission President said Wednesday.

It added: “ECOWAS Commission further notes that, in an effort to address the demands of the protesting youth, the Federal Government of Nigeria took important decisions regarding disbandment of SARS, comprehensive police reforms and investigation of cases of police brutality. It encourages the Nigerian Authorities to conduct the investigation rapidly.

“Finally, ECOWAS Commission appeals to the Federal Government of Nigeria, the Nigerian youth and the civil society to urgently pursue dialogue for an early and amicable resolution of this social unrest and maintain the Nigerian image as a bastion of law and order.
Abuja, 21 October 2020”.

Scores of Nigerians have thronged the streets for days in protest against brutalities in the Nigerian Police force.

Previous Election 2020: ‘We’ll vote for Mahama’ – Menzgold customers
Next The state of the Akyem Batabi Church building before it collapsed