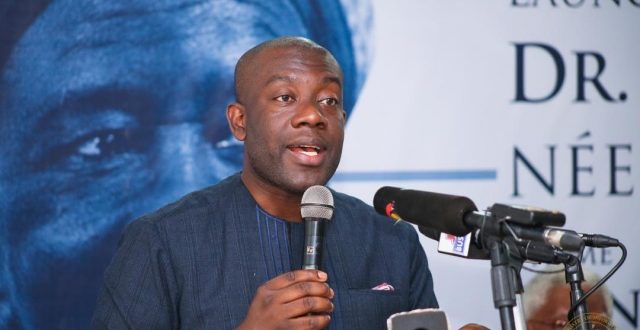 The Minister of Information, Kojo Oppong Nkrumah, has praised the legacy and achievements of celebrated Ghanaian Industrialist Dr Mrs Esther Ocloo and urged young entrepreneurs to emulate her can-do spirit.

According to Mr Nkrumah, the works of Dr Ocloo should inspire the next generation of industrialists and spur them on to be innovative and productive.

Mr Nkrumah made the comment when he delivered the keynote address at a ceremony in Accra to launch the activities marking the centenary celebration of the life of Dr Mrs Esther Ocloo, who died in 2002.

The ceremony was on the theme: ‘Honoring a legend of her time’.

He said the late renowned industrialist dedicated her life to helping others, especially women, and gave many people the hope that they can succeed.

“The AGI is a befitting living tribute to her legacy but it will be important to institutionalise her vision and the values that she stood for so that the next generation of industrialists here in Ghana can learn from it”, the minister added.

Like Dr Ocloo, Mr Nkrumah said many young people can also take up the challenge and make major contributions to the development of the country.

“We live in a time when, increasingly, the role of the every-day citizen is downplayed and for every matter that comes up, officialdom or the government is looked to for solutions. But there is a lot of room for the everyday Ghanaian to make major contributions as she did to the development of our nation”, he noted.

The Ofoase Ayirebi legislator charged the media to make time to highlight Dr Ocloo’s success story, legacy and promote how today’s young businesspeople can learn from it.

Dr Mrs Esther Ocloo’s pioneering work in the development of the indigenous industrial sector in the country led to her establishing Nkulenu Industries as the first food processing factory in the then-Gold Coast in 1942, which inspired many to do same.

Three decades later, she introduced Ghanaian foods, through her industrious drive, onto the international market and paved the way for the export of several other Ghanaian food brands.

In 1988, Dr Esther Ocloo co-founded Aid to Artisans Ghana to promote and support the development of handicraft for export, thus, helping to create employment and increase incomes of various artisans. When she departed to her maker in March 2002, the government at the time, headed by President John Agyekum Kufuor, honoured her with a state burial.

Tags CAN DO SPIRIT