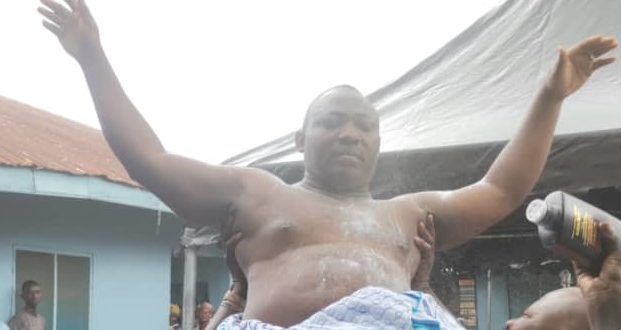 The Ejura Traditional Council on Friday October 14, 2022, installed an alumnus of the University of Cape Coast as the first ever chief to represent the Ejura Diaspora Community.

The new chief, Nana Osei Kofi ll, known in private life Hanson Egyirifo, would be responsible bringing together all indigenes of Ejura who have traveled outside Ghana and also seek to their welfare.

The chief of Ejura Traditional Area Barima Osei Hwedie II admonished the new Chief to live an exemplary life worthy of emulation, saying: “Your conduct henceforth will be regulated.

“You are expected to hold yourself out in dignity and not bring your name and the revered chieftaincy institution into disrepute.”

Barimah Osei Hwedie II urged the new Chief to be guided by wisdom, honesty, and exhibit quality leadership in order to succeed as a Leader.

Speaking to OTEC News Kwame Agyenim Boateng after performing all the necessary traditional rights at the Ejura Palace at, the new Chief called for unity among the community for development.

Nana Osei Kofi II, promised to bring together all Ejura residents across the globe to   bring development to the area.

He commended the traditional council and residents of Ejura for the peaceful exercise and promised to ensure peace and unity rapid socio-economic growth.

Mr Hanson Egyiri is a former student of the University of Cape Coast and has served as a tutor at Saint Monica’s SHS, Kumasi Anglican SHS and Sefwi Bekwai SHS before moving to London.

Previous Growing the natural hair in the natural way
Next UNDP commits 700,000 dollars to SMEs in Ghana