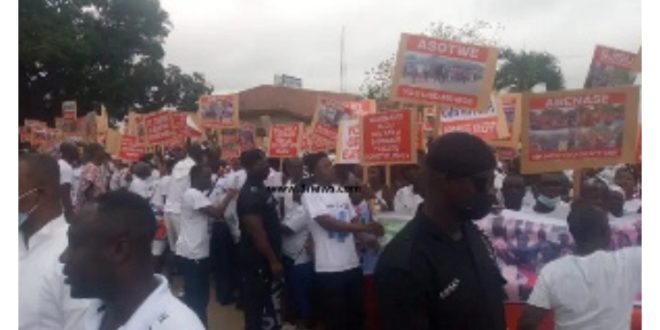 Share
Hundreds of elected polling station executives of the New Patriotic Party (NPP) in the Ejisu Constituency on Wednesday, March 16 embarked on a massive procession.

The procession was to refute claims that the recently held polling station election was illegally conducted.

Some aggrieved individuals had accused the election committee of holding polls in the night just to favor some party members, a claim which has been labeled as “malicious” by the Ejisu Constituency Acting Director of Election and Research, Dominic Dankwa.

Wednesday’s march also targeted the Municipal Chief Executive (MCE) of Ejisu MCE, Samuel Oduro Frimpong, who is said to have masterminded the rejection of the polling station election.

Some of the placards carried by the marchers read: ‘We don’t need Ejisu MCE’, ‘Mr MCE, are you blind?’ and ‘Mr MCE, You can’t see’.

The MCE has since rejected all the allegations leveled against him by some party supporters and stressed that he has nothing against incumbent Member of Parliament John Kumah.

Abigail Boadi, the Women’s Organiser at Ejisu Essianimpong Polling Area, said “the election was conducted in the day time”.

She showed pictures as evidence.