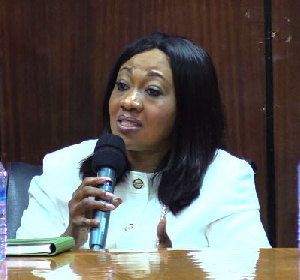 Mrs Jean Mensa Chair of the Electoral Commission (EC) has revealed that the elections management body will file official complaint at the Police against the failed presidential aspirants allegedly forged claims on their nominations forms leading to their disqualification.

The EC disqualified five aspirants from contesting in the polls. Citing breaches on their forms.

In all twelve aspirants have been cleared to contest in the polls this year.

The flagbearers of the All People’s Congress (APC) and the National Democratic Party (NDP), Hassan Ayariga and Nana Konadu Agyemang Rawlings were cleared by the EC.

John Mahama of the NDC and President Nana Addo Dankwa Akufo-Addo of the NPP were also cleared by the EC to contest.

Ivor Kobina Greenstreet of the Convention People’s Party (CPP), Brigitte Dzogbenuku of the Progressive People’s Party (PPP) and Kofi Akpaloo of the Liberal Party of Ghana (LPG) were also cleared by the EC.