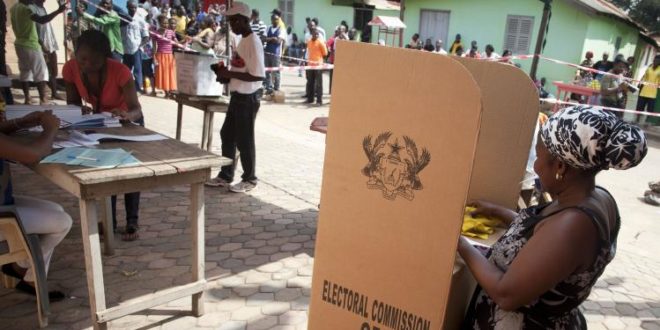 People cast their votes in presidential and parliamentary elections at a polling station in Tesano, Accra, Ghana, Saturday, Dec. 8, 2012. About 225 polling stations reopened Saturday for an impromptu second day of voting after there were technical breakdowns on the first day of voting, Ghana voting officials announced. Some voters waited in line all day Friday and then returned to vote on Saturday. (AP Photo/Gabriela Barnuevo)

The Electoral Commission, Ghana (EC) has scheduled Tuesday, December 1 as date on which to hold its early voting for voters who will work on election day.

The Special Voting exercise is meant for voters who as a result of their duties on election day are unable to vote at polling stations where they registered on the day of elections.

Among these are election officials, security personnel and media personnel who will work outside their jurisdiction on election day.

The Commission, in a statement on Friday, October 2, requested lists of voters in this category as per the Public Elections Regulations of 2020, CI 127.

These category of voters are expected to submit their voter ID card details to the Director of IT Projects at the EC’s headquarters not later than Thursday, October 15.

“Lists received after the 15th of October, 2020 will not be processed.”

The main elections – both parliamentary and presidential – will be held on Monday, December 7.

Previous Tension in Kumasi as military, police storm Central Mosque
Next 130-year-old granny dies chasing a debtor for her GH¢34