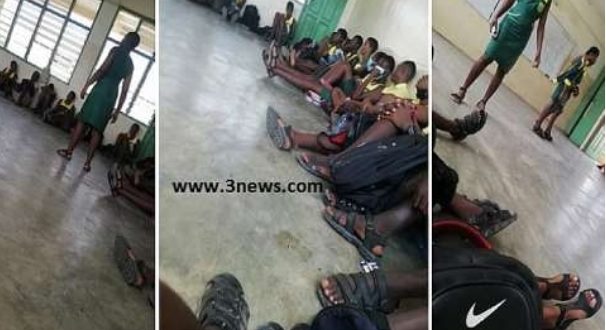 Share
Some 45 General Arts students of Ebenezer Senior High School in Dansoman in the Greater Accra Region have been compelled to study on the bare floor since Thursday, March 10.

This is because the Headmistress of the school has parked all the desks from the classroom because the students could pay an amount of GH¢600 each.

A guardian to one of the students who sent Whatsapp messages on condition of anonymity told Onua TV that three of the desks got broken, so the headmistress directed that three students were not getting desks to sit on.

The guardian explained that the headmistress gave them up Thursday, March 10 to pay the GH¢600 each.

“The desks are three so she asked them [students] to pay GH¢600 each.

“Since they couldn’t pay, she took all the desks out on Thursday and till today, [the students] were still sitting on the floor when they went to school”.

Teachers have since been teaching while students sit on the floor.

According to the source, several pleas by the student for the headmistress, whose name has been given as Madam Anastasia, to temper justice with mercy have proved futile as they keep sitting on the floor to study.