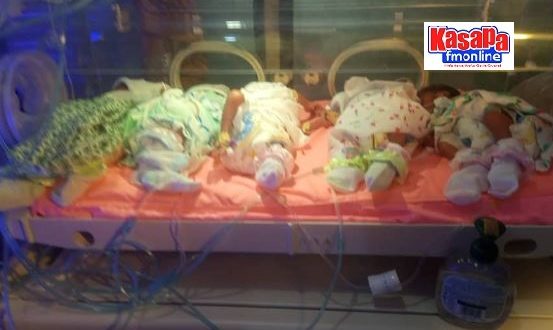 A 37-year-old woman, Hellen Tetteh has delivered a set of five (5) babies (quintuplets) at the St Martin’s de Porres hospital at Agormanya in the Eastern region.

She was delivered through Caesarian section Wednesday morning July 13, 2022.

The babies delivered during early third trimester are however in stable condition but currently in Neonatal Intensive Care Unit(NICU) to gain more weight before being discharged together with the mother.

Hellen Tettey already has a set of female twins but lost their father hence married to her current husband.

According to her, she was quite surprised to deliver quintuplets because a scan performed during her pregnancy at Tarkwa where she lived with her husband before coming to Agormanya to stay with her family revealed she will deliver triplets.

She is however excited about the gift of the womb but appealing for public support to help take care of the babies.

Dr. Bansah Miriam Theodora, Health officer also Clinical Coordinator at St. Martins de Pores Hospital told the media that “The midwives called me on phone this evening that a pregnant woman has been brought in but her SFH was more than 35 which was 50cm. So we went to do emergency CS which we delivered 5 female babies that are quintuplets. The babies are doing well in incubators, the mother too is doing well. I am happy because this is my first time delivering quintuplets. They are currently in Neonatal Intensive care unit doing everything for them to improve their weight which is now less than 1KG we are hoping to help them gain more weight at least 1.8kg or 2KG before we discharge them”