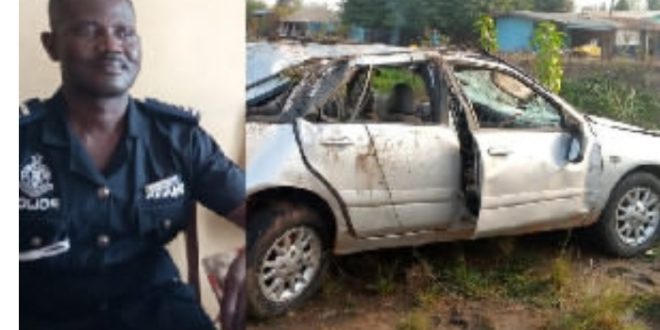 E/R: Police Chief Inspector and wife die in a ghastly accident at Akuse

The incident occurred near the Government Hospital at Akuse where the accident vehicle was found in cannel.

According to police investigators who visited the scene, on reaching Marigo junction near the Akuse government hospital, they found a Nissan salon car with registration plate number GR 7365-10 in the nearby channel full of water.

With the help of the Volta River Authority (VRA)  Fire Service, the accident car was pulled out from the cannel immediately and the lifeless bodies of two occupants were discovered.

A personal diary and a handcuff were found in the car and upon further checks, it turned out that the male deceased was Chief Inspector James Tey while the other was his wife.

The body of both have been deposited in the morgue at Akuse government.

Preliminary investigations suggest the Police Chief Inspector was crossed by a motor rider who crossed him and swerved him to avoid crashing but ended up in the river at Akuse dying on the spot.