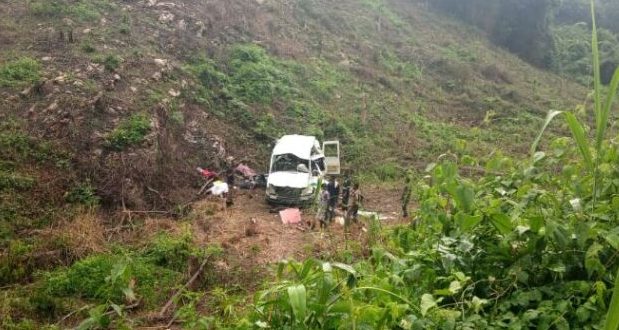 E/R: 6 die in accident at Apirede

Six people died on the spot in an accident that happened at Apirede mountain in the Okere District- Eastern Region on Friday, 7 October 2022 around 1:30 Pm.

The sprinter with registration number GY 1570-13 carrying some passengers from Koforidua attending a funeral at Aflao was involved in an accident.

According to an eye witness who is also a driver named TT, he signaled the driver who was overspeeding to reduce the speed due to the nature of the road but he ignored it.

“The driver should be blamed, he was over speeding and I told him to reduce it but he did not even look at me so I was not surprised it happened. The car somersaulted severally” he stated.

About a month ago, students from the University of Education Winneba who were on an educational trip had an accident on the Apirede mountain which claimed four lives.