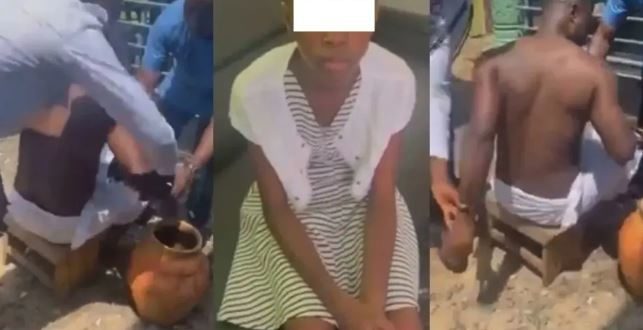 The Duplicated case docket on Evans Kyekyeku Oppong, the businessman arrested for attempting to use his daughter for a money ritual has been forwarded to the office of the Attorney-General.

The AG’s advice on the docket will determine how the case will progress.

Oppong, a machine operator, 47, was arrested on June 3 after he was exposed by the spiritualist whom he had visited to kill his 11-year-old daughter.

In court on Monday, July 18, 2022, Chief Inspector Lawrence Kofi Anane who held brief for substantive prosecutor Chief Inspector Richard Amoah told the court that, the duplicate case docket has been forwarded to the AG’s office.

“My instructions are that the duplicate docket has been forwarded to AG’s office for advice,” the prosecutor told the court.

While praying for an adjournment, the prosecutor said at the next sitting, he will show the honourable court the proof of the fact that the duplicate has been sent to the AG’s office.

Ralph Agyepong, counsel for the accused for his part also told the court that, he is aware that the duplicate docket has been forwarded.

“But, I will oblige them an adjournment and I know the AG will do the needful,” Counsel noted.

The Court presided over by Her Worship Ama Adomako Kwakye renewed the remand warrant and adjourned the case to August 1, 2022.

The accused is on a provisional charge of Preparation to commit crime to wit; Murder and his plea has been reserved.

The brief facts of the case presented to the court by Chief Inspector Amoah were that, the Suspect Evans Kyekyeku Oppong aged 47 years is the father of victim (name withheld) aged 11 years.

He said, the suspect has been living in Holland for many years but relocated to Ghana a year ago.

The prosecutor told the court that, in May 2022, the suspect discussed with a friend known as Kwame that he was facing financial difficulties.

Chief Inspector Amoah told the court that, the friend suggested that the suspect will need a spiritual cleansing to turn things around for him.

He added that the friend later introduced the suspect to one Nana Fosu alias Nana K.K to assist him to see a Spiritualist for help.

He said on May 29, Nana Fosu took the suspect to Nana Adu-Boafo Jnr who is a Spiritualist and a Herbal Practitioner at Oyibi Kon for money rituals.

“However, the suspect later informed the Spiritualist that he is afraid of snakes as such he will come to him for further discussions on what to do.

“The suspect later had discussions with the Spiritualist during which the suspect suggested human sacrifice for the money rituals.

“The Spiritualist feigned interest and told the suspect to furnish him with the date of births of his last two (2) children to enable him to determine which of them will be suitable for the sacrifice,” Chief Inspector Amoah told the court.

The prosecutor said, on May 31, the suspect rang the victim’s mother to confirm the day, the victim was born and told her that he will pick up the victim to be taken to a friend who had returned from abroad for measurement so that a dress will be sewn for her.

“The suspect furnished the Spiritualist with the date of birth as requested. The Spiritualist then alerted the Oyibi Police about the intended human sacrifice by the suspect and the Police urged him to play along with the suspect so he could be arrested when he produces the child at the Herbal Centre for the said sacrifice,” he told the court.

He added that the Spiritualist later informed the suspect that he had spiritually checked on the date of birth of the two children and that the victim will be suitable for the sacrifice.

He said the Spiritualist instructed the suspect to bring the victim to his Herbal Centre on June 3, 2022.

“In the morning of June 3, 2022, the suspect rang his elder brother to release his car to visit a Herbal Centre for treatment as a result of a car accident he had recently.

He said, that morning around 8.00 am, the elder brother released the vehicle to his son to go and pick up the suspect at the herbal Centre and on their way to said Herbal Centre, they picked the victim at Amasaman.

“At a spot at Oyibi suspect asked the driver to wait for him and he took over the car. The suspect later stopped and bought three “Ghana must go” bags and two bottles of schnapps.

“The suspect arrived at the Herbal Centre with the victim and she was instructed by the Spiritualist to sit in the Hall whilst the suspect was also instructed to change his clothing on the compound and was later given a white calico to tie around his waist.

“The suspect was then given a concoction to bath and in the course of that the Spiritualist called in the Oyibi Police who came and arrested him and rescued the victim. An investigation is ongoing,” the prosecutor told the court.