Home / POLITICS / Duffuor, Zanetor or Forson: Mahama to announce running mate in May 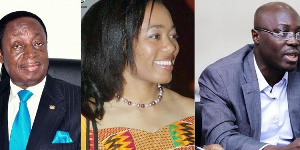 Duffuor, Zanetor or Forson: Mahama to announce running mate in May

After several months of dithering and ‘insider-trading’, former President John Dramani Mahama, who is the flagbearer of the opposition National Democratic Congress (NDC), will be naming a running mate in May.

According to one of our highly-placed sources in the NDC, “three final names have been penciled for consideration, and one of them likely to be nominated for the slot.”

The three names, we understand, have been arrived at with permutations to the 2024 general elections, rather than the upcoming December elections.

Mr Mahama is said to be considering a personality who could, somewhat, match the pedigree of Vice-President Mahamudu Bawumia, as demanded by his party elders, “but with no potential to upstage him as far as Agenda 2024 is concerned.”

The sources say still cagey John Mahama is considering, first and foremost and for political profit, “the accomplished daughter of our party’s Founder” and Member of Parliament for Klottey Korle, Dr Zanetor Agyeman-Rawlings. The choice of Zenator is targeted at courting the support of the Rawlings family.

One other eminent personality who is being seriously considered by Mr Mahama is Dr Kwabena Duffuor, who is former Minister of Finance in the late Mills’ administration and former Governor of the Bank of Ghana (BoG).

According to our sources, Dr Duffour’s candidature is being considered due to his Ashanti background and affluence. More importantly, Mr Mahama is said to prefer him because of his age, which convinces him that he will be too old to want to contest for President in 2024. “Mahama simply sees Duffuor as posing no threat to him in 2024, which is when, realistically, many in our party believe he is aiming at a serious comeback,” one of our sources said.

The other name that is equally being considered strongly is the former Deputy Minister of Finance and Member of Parliament for Ajumako Enyan Essiam, Cassiel Ato Forson. According to our sources, Mr Ato Forson “is being seriously considered simply because he is from the Central Region, and also because he doesn’t have the charisma to use the running mate platform to elevate himself in 2024 to pose any threat to Mahama.”

Some stalwarts of the NDC such as the former Central Region Chairman, Bernard Allotey Jacobs, have said that Mr Mahama has been unable to select a running mate because Vice-President Bawumia has raised the bar for the opposition party.

After over a year of his election as the flagbearer of the NDC, many political pundits still find it difficult to understand why former President Mahama has not been able to choose a running mate, with barely six months to the December 7 presidential and parliamentary elections. They believe the continuous delay in the nomination of a running mate can hurt the opposition party.

Others have argued that the party’s inability to nominate a running mate can be attributed to the “Bawumia factor”. They believe the Vice-President’s style of politicking and understanding of economic issues demand that the opposition party gets someone of similar pedigree.

“The greatest problem my party is facing is that, up till now, we have not nominated our running mate…so Vice-President Mahamudu Bawumia is raising the bar; he is really raising the bar and it will go to the extent that we would have to get someone with his pedigree to interface with him,” Mr Allotey Jacobs stated a couple of months ago.

He even went ahead to add that if the NDC was unable to nominate its running mate by April, the 2020 general election would be “a forgone conclusion” for the NPP.

“You see, he has in a way roughly driven into our political space. Right now, from 2017 till now, he is occupying almost two-thirds of our political space because we popularise him by criticising him every day. The more you mention him, the more he resonates with the people and that’s the mistake,” Mr Allotey Jacobs said of Vice-President Bawumia.

Previous You slept with my girl – Funny Face calls out Kalybos, Bismark The Joke and Lil Win
Next Mass Burial Held For 33 Unclaimed Bodies In Sunyani