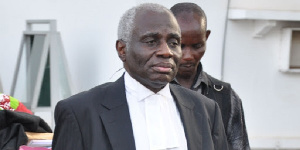 Events got more interesting at the Supreme Court on the second day of the 2020 election petition as Tsatsu Tsikata, counsel for John Dramani Mahama, exchanged words with a member of the Supreme Court panel hearing the case.

On the chopping board today was a request by lawyers for John Dramani Mahama, for the chairperson of the Electoral Commission, Jean Mensa, to respond to questions on errors she made during the declaration.

The lawyers had filed a motion asking Jean Mensa to concede to making errors in the declaration.

In the course of arguing out the motion, Tsatsu Tsikata got into a brief verbal debate with Justice Nene Amegatcher.

Presenting his argument, Tsatsu kept referring to Jean Mensa as an individual instead of her office; the Electoral Commission in its entirety.

This did not go down well with Justice Amegatcher who demanded Tsatsu to direct his questions and statements to the office of the EC chair instead of personalizing it.

This resulted in a stand-off between the two legal brains.

Below is a transcript of the encounter as done by TheGhanaReport

TT: Respectfully my lord, there is only one Returning Officer for the presidential election and that is the EC chairperson.

NA: let’s leave it at that, Chairperson of the Electoral Commission and not her person.

NA: The question should be to the office.

TT: I want to understand, Am I being prohibited from mentioning the name of the Chairperson, is that the issue?

NA: Reading through your petition which makes constant emphasis on the name, what I am telling you is that we will be satisfied with the designation because in her absence any of her deputies could act in that position.

NA: So, it is an election petition and you are challenging the election, it is sufficient that the institution charged with the conducting that election had done their work and the Chairperson who is the head represent that institution and not the personality.

TT: With the greatest respect, I believe that the constitutional requirement regarding the returning officer and the particular circumstances do not make it possible to step in for the Chairperson, it cannot be like you are envisaging.

At the end of proceedings, the motion filed by John Mahama’s lawyers was quashed by the seven-member panel.