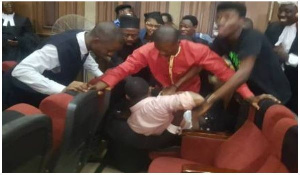 There was mild drama as about 15 operatives of the Department of State Service rearrested Sahara Reporters publisher, Omoyele Sowore, and his co-defendant, Olawale Bakare, after the Friday’s proceedings at the Federal High Court in Abuja.

It was reported that operatives of the DSS invaded the courtroom to effect the arrest.

He was rearrested after the close of the Friday’s proceedings which the judge, Justice Ijeoma Ojukwu, had adjourned till February 11.

Before the fresh arrest, a stampede occurred as Sowore and his supporters tried to resist the operatives of the DSS numbering about 15.

The development disrupted the proceedings which Justice Ojukwu was conducting after Sowore’s case was adjourned.

The judge was forced to suspend sitting directing that the rest of the cases on her list for the day should be adjourned.

Sowore’s lawyer, Mr. Femi Falana (SAN), told our correspondent that lawyers in his team had attempted to meet with the #RevolutionNow protest convener in custody but were not allowed.

He said Sowore’s co-defendant, Adebayo Bakare, could be rearrested too.