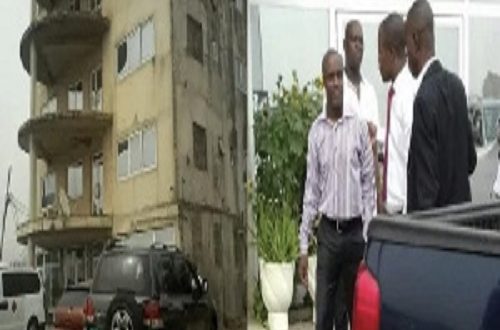 Private health facility, Advanced Bodysculpt Centre popularly known as Obengfo Hospital has been closed down again, by the Health Facilities Regulatory Authority (HFRA) for allegedly practicing without a license.

A reliable source close to sammykaymedia.com, indicate that the Chief Executive Officer of Obengfo Hospital, Dr Dominic Obeng-Andoh was arrested in the process.

This was after a banter ensued between the health regulatory authority and management of the Bodysculpt Centre over its legibility to operate as a health facility.

Addressing the media after the exercise, the Registrar of HFRA, Dr. Philip Bannor stated that the decision was a very difficult one for him to take, but he was required to enforce the law.

Dr. Philip Bannor further insisted that the agency had given negligent health facilities a six-month grace period to right any wrong but some of them failed to utilize the opportunity given them.

He added ….“We have had to take this decision against a colleague who is working hard in his view to operate a private health facility. But for me as a regulator, I often describe myself to be having two hearts which includes enforcing the law and the other responsibility is also to offer information to proprietors and owners of health facilities and by that, I guide them as to how they can be in compliance with the law.”

“All the facilities that we are going to visit today have had six months to come in compliance with the law. Some of them we have had roundtable meetings with them on what to do but are compelled to make this difficult decision that we had to make.”

‘You patronize Obengfo services at your own risk’ – Medical Council to Ghanaians.

The Medical and Dental Council in 2019 cautioned the public to desist from patronizing the services of Obengfo health facility.

This was because the Council had insisted that the owner of the facility, Dr. Dominic Kwame Obeng-Andoh, had not been licensed to practise as a body sculpting specialist.