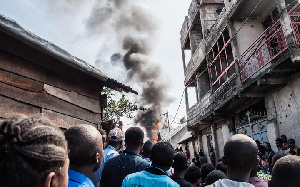 A plane with at least 16 passengers and two crew has crashed into homes in Goma city in eastern Democratic Republic of Congo.

North Kivu regional governor Nzanzu Kasivita Carly said there had been deaths, but did not give a number.

The plane crashed into houses in the Mapendo neighbourhood after “missing” its take-off from the city’s international airport, he added.

Residents on the ground were among the casualties, local media reports said.