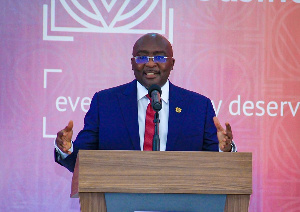 Share
The Vice President Dr. Mahamudu Bawumia has donated GH¢100,000.00  in support of the construction of the Ejura-Sekyedumase Divisional Police Command in the Ashanti Region.
The money was to fund the roofing of the storey building which is almost ready to house about hundred police officers in the Ejura-Sekyedumase Municipality.
This donation followed Dr Bawumia’s first presentation of one thousand bags of cement during the innitial stage of the project which was the brain child of the chief of Ejura Traditional Area Barima Osei Hwedie II in 2021.
Dr. Bawumia made the donation during a short meeting with the chief of Ejura Traditional Area, Barima Osei Hwedie II in Accra on Sunday November 12,2022.
Dr  Bawumia during the presentation said it was his outmost wish that the project will  be completed on time to help beef up security in the area.
He pledged his commitment to supporting authorities at Ejura to maintain law and order in the area.
Chief of Ejura Traditional Area Barima Osei Hwedie II who welcomed the support said, Dr Bawumia’s kind gesture was timely.
He praised the vice president over his continuous support to the development of the Ejura-Sekyedumase Municipality and Ashanti Region as a whole.
“Dr Bawumia’s efforts to ensuring that Ejura Traditional Council’s vision of putting up a place for the municipality’s Divisional Police Headquarters come through is unprecedented”
“We are very lucky to have the support of no other than the vice president who is keen on working towards enhancing peace and security of Ejura Residents”
CLICK HERE TO DOWNLOAD PRESS RADIO MOBILE APP

“We at Ejura are wishing him well in all his future endeavors and we hope he will continue to shine in his political career and help others “
Source: Ghana/otecfdmghana.com
DR.BAWUMIA Ejura-Sekyedumase Divisional Police Command project 2022-11-14
admin
Share