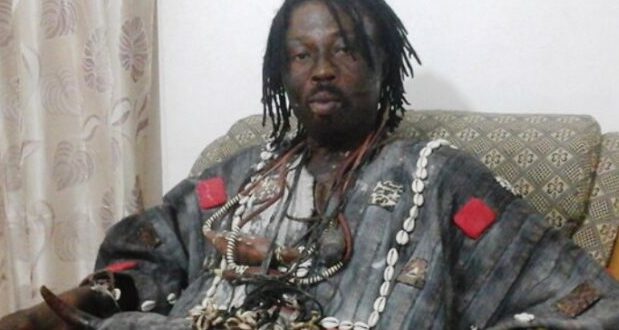 Renowned Fetish Priest, Kwaku Bonsom has dismissed the existence of what many describe as double money charm.

According to him, no such charm exists and that fetish priests who advertise on TV claiming to have such powers are fake, urging the public not to trust them.

His comment comes on the back of the arrest of popular fetish priest turned pastor, Patricia Asiedua aka Nana Agradaa over allegations of a money-doubling scam leveled against her by some members of the public.

On Saturday, videos emerged on social media of her victims wailing at the church premises at Weija in Accra after she allegedly swindled them.

Nana Agradaa is said to have earlier promised on TV to give away GH¢300,000 to her congregation with the guarantee of doubling any amount of money an individual offers her.

The news drew a large crowd to the church on Saturday to give various amounts of money with the hope of having it multiplied.

But Nana Agradaa after taking their monies, shut her church doors and absconded after delivering a sermon.

Commenting on the development in an interview on Ghana Kasa show on Kasapa 102.5FM/Agoo TV, Kwaku Bonsam stated Ghanaians will continue to fall victim to such scams if they don’t wise up and stop their greed.

He stressed that if there existed any money-doubling charm he would have utilized it and donate billions of Ghana Cedis to the State to prevent the country from seeking a bailout from the IMF.

Previous C/R: Man washed away while defecating in the sea at Anomabo
Next 14-year-old boy, 10 others arrested at ‘wee’ joints