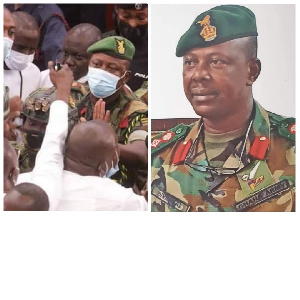 Like Peter did to Jesus Christ, hours before his crucifixion, the heavily armed soldiers who invaded the chamber of Parliament during the heated exchanges between the National Democratic Congress (NDC) and New Patriotic Party (NPP) Members of Parliament-elects (MP) over the processes leading to the election of the speaker, have been denied by everyone.

The Commander of the military contingent has been identified as Colonel Joe Punamane. He is said to be at the Presidency Annex. But until that appointment, he was the Director of Port Security at Tema.

Civil society organizations, ordinary citizens, as well as MPs, mainly from NDC side of the House continue to question who sent or called in, Colonel Joe Punamane and his armed soldiers to the chamber of the Parliament, but it does not look like the Colonel or his superiors at the Ghana Armed Forces (GAF) will respond to accusation of trying to stage a Parliamentary mutiny.

There was no Parliament and there was no President at the time. The Chief Justice, Kwasi Anin Yeboah, who was in the premises of Parliament to swear in the Speaker at the time, fled when the military started advancing towards the Chamber.

It is not clear, who prompted him to leave. He later returned to swear in the Speaker-elect, Alban Bagbin, albeit hurriedly failing to even sit for the Speaker’s inaugural address.

The Standing Orders of Parliament, prohibits weapons in the Chamber of Parliament, and it is unclear whether the military invasion and other chaotic incidents witnessed in Parliament on the day will be investigated by a by-partisan committee of parliament when the House resumes for business.

The MP for Damango, Samuel Abu Jinapor, who until recently was a Deputy Chief of Staff at the Presidency and said to have been seen together with the ongoing Minister of Defense, Dominic Nitiwul leading the soldiers into the Chamber, has denied doing so.

Defence Minister, Dominic Nitiwul, the MP for Bimbilla in the Northern Region, has also denied allegations by Tamale Central MP, Murtala Mohammed, that he ordered the military invasion into Parliament.

Although, Murtala Mohammed had insisted on seeing and hearing his counterpart from the Northern Region, Nitiwul making the phone call, and had warned him against the move.

The Chief Marshall of Parliament, Col. John Buntugu Rtd., also denied ever inviting the military personnel into the Parliamentary chamber on Thursday dawn during the inauguration of the 8th Parliament.

The denials, leave the outgoing Interior Minister Ambrose Dery, MP for Nandom Constituency in Upper West Region, Francis Asenso-Boakye, the MP for Bantama in the Ashanti Region and former Deputy Chief of Staff at the Presidency in-charge of Operations and Daniel Kweku Botwe MP for Okere in the Eastern Region, who have all been mentioned as part of the decision to send the military into the chamber. But they are yet to confirm or deny the claim against them.

The presence of the armed military, has since attracted condemnation from the MPs and other relevant bodies with some holding the marshal of parliament responsible, since he is in charge of the general security of the House.

But denying the claims, Col. John Buntugu Rtd., said: “We have a police station in the Parliament House, but it is under the Marshal of Parliament. We don’t have soldiers. The soldiers were not under my instruction. I don’t know what actually happened [but] I saw them in the Chamber and I spoke with their commanders when I realized that it was counterproductive, and they left”.

Dominic Nitiwul, reacting to the allegation that he ordered for the military, the MP denied the claims, saying “It got to a point that Members of Parliament themselves were a danger to themselves. A danger to Ghana. Any Member of Parliament could have used a knife or an offensive weapon on another”.

He indicated that the Soldiers were on the premises for the inauguration of the President and sensing danger had to come in to protect the MPs, who were engaged in near fisticuffs.

“In any case, if you need them or they sense that at a point the MPs are a danger to themselves, at least they will come and protect us, and … that was exactly what happened. Nobody called them,” Nitiwul said.

The lawmaker further indicated that he told Murtala of the presence of the military.

“I gave him the information, and anybody who cares to know, I think one or two MPs were standing by the Majority when I told them that, ‘Look, there are soldiers and police all around to protect you, to protect me and to protect the state tomorrow.”

The only MP who has publicly appreciated the professionalism of Colonel Joe Punamane and his men, has been Alhaji A.B.A Fuseini of the Sagnarigu Constituency, Northern Region.

He said after storming the House, when issues were explained to the soldiers, they orderly matched out.

Meanwhile, ex-President John Mahama, insists all the shortfalls in Ghana’s democracy since the Akufo-Addo government assumed power played out in Parliament during the election of Speaker of the Chamber on Thursday.

He described as an abomination the invasion of the parliamentary chamber by the armed soldiers during the inauguration of the 8th Parliament on January 7, 2021, adding the sight of the incident made Ghana appear like a ‘banana republic’; a politically unstable country governed by an authoritarian regime.

The 2020 flagbearer of the NDC, said the incident was an unpleasant sight that mirrors some of the things that occurred during the 2020 polls.

“Everything that is wrong with our democracy under this President played out in Parliament that night. Snatching of ballot papers, attempting to disenfranchise the voters by getting Assin North MP out of the chamber… Attempting to compromise the secrecy of the ballot, the entry of the military of the chamber.

That is an abomination, it makes us look like a banana republic. Because you [MPs] were there, and you were emotionally charged, I’m sure the infamy of that event did not strike you but when you see it on TV again, you will see how low our democracy has sunk under this presidency,” John Mahama said.

Several unexpected incidents characterized the dissolution of the old Parliament and inauguration of a new one from the night of Wednesday, January 6, 2021, to Thursday, January 7, 2021.

These incidents included the several chaotic disruptions in the voting process for a new Speaker of Parliament, the snatching of ballot papers as well as the invasion of military personnel.

The NDC’s proposed candidate for Speaker, Alban Bagbin was eventually elected as the Speaker of Parliament. John Mahama believes it was the hard work and vigilance of the NDC members in Parliament that ensured that the process continued to the end and the Speaker duly elected.

He said their actions were a “not a fight for yourself, it was not the fight for the NDC, it was a fight to protect the democracy of Ghana.”

The Civil Society Organisations (CSOs) in Election Programming in Ghana, have expressed worry with the developments that characterised the dissolution of the 7th Parliament for the commencement of the 8th Parliament.

According to the CSOs, Ghanaians woke up to video recordings and media reportage of the appalling scenes in Parliament for a supposed sacred and solemn process of electing a Speaker of Parliament and swearing of Members of Parliament (MPs).

The Civil Society Organisations (CSOs) in Election Programming in Ghana have also expressed worry with the developments that characterised by the dissolution of the 7th Parliament for the commencement of the 8th Parliament.

“The presence of Military in the Chamber of Parliament was an extremely low point in the proceedings of Parliament,” the statement endorsed by the 14 CSOs and copied to Capitalnewsonline.com read.

They condemned the arts that were witnessed last night and this dawn at the Chamber of Parliament and called on all political parties and stakeholders to work in preserving the democratic gains of the nation.

Political leaders should commit to spirit of compromise and accommodation to preserve Ghana’s democratic gains.

The scenes witnessed by Ghanaians, and played out before the international community, betrayed our political leaders’ proclamations, and expressed commitments, to democratic principles, the rule of law and the pursuit of the public interest.

At the height of the disorder that ensued, first the Police were called in, and then Military officers were invited in to restore order. The presence of the Military in the Chamber of Parliament was an extremely low point in the proceedings of Parliament.

It reflects a recent pattern of excessive use of the Armed forces to deal with civilian matters.

As a nation, we must quickly move away from this developing pattern as we move forward. Also, for a temporary period, the unruly antics of Members of Parliament Elect threatened to prolong a dangerous constitutional and governance situation, where there was no Parliament and no President to govern the country.

We condemn in no uncertain terms, the snatching of the ballot box and expect the perpetrators of this act to be disciplined by the House.

Fortunately, the political leadership of the New Patriotic Party (NPP) and the National Democratic Congress (NDC) have managed to find a compromise, leading to the election of Algban Bagbin as the Speaker of the 8th Parliament of the 4th Republic; Joseph Osei Owusu as 1st Deputy Speaker, and Andrew Asiamah Amoako as 2nd Deputy Speaker.

The resolution achieved by the two political parties confirms that the only way the 8th Parliament can succeed is by the two sides working together in a spirit of compromise, consensus-building, and accommodation, in the service of all Ghanaians, and in pursuit of development for the country.

It is our expectation that a culture of mediation, negotiation, and compromise will be adopted by Parliament going forward, particularly to conclude the first part of the democratic transition process that will culminate in the inauguration of the President-Elect, without prejudice to ongoing judicial processes challenging the 2020 Presidential Election Declaration.

In this spirit, we urge the NDC and all other political parties to fully participate in the inauguration to help promote unity and peace in the country.

Lastly, a number of legal and constitutional matters have been uncovered during the fraught process to elect the speaker and require reflection and reform.

In due course, we hope to fully engage on these matters. We call all well-meaning Ghanaians to add their voice to this call and ensure a smooth and peaceful democratic transition going forward.

Previous NewsCrimeHot AudioPolitics They want to finish me, I need state security – Keta MP cries after suffering another robbery attack
Next Carlos Ahenkorah constituents open petition book For His Removal