Home / POLITICS / Did an increase in the cost of Akufo-Addo’s favourite private jet lead him to fly commercial? 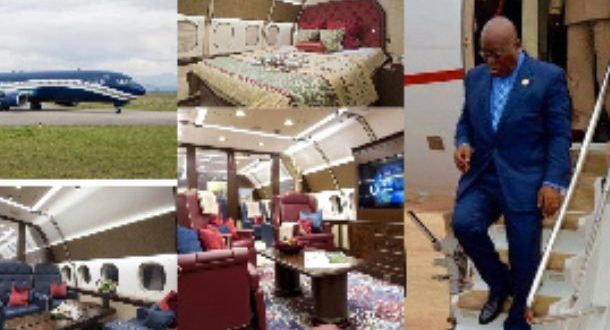 Did an increase in the cost of Akufo-Addo’s favourite private jet lead him to fly commercial?

Share
President Nana Addo Dankwa Akufo-Addo on Monday, March 7, 2022, left Ghana to the United Arab Emirates as the head of Ghana’s delegation to the 2020 Dubai Expo.

While the president’s travels generally generate news, his recent travel to Dubai has ignited another conversation that has always come up on all his foreign travels in recent times.

Opposition Member of Parliament for North Tongu, Samuel Okudzeto Ablakwa has noted that the president in almost a year has resorted to using an ultra-luxurious chartered executive jet for his foreign travels since May 2021.

Specifically, Samuel Okudzeto Ablakwa points that President Akufo-Addo on such travels acquires the services of Global Jet Luxembourg, a European private jet company and has over the period settled on a Boeing 737-97YER(BBJ3), registered LX-DIO and operated by the company for his foreign travels.

While the opposition MP for several months has berated the president and accused him of profligacy at the expense of the Ghanaian taxpayer, Samuel Okudzeto Ablakwa in a rare move has been praising President Akufo-Addo concerning his Monday trip to Dubai.

In his recent Facebook post, the North Tongu MP indicates that the president opted to use an Emirates commercial flight instead of the usual luxurious LX-Dio.

According to Okudzeto Ablwakwa, “by commendably opting to fly First Class on Emirates and avoiding another extravagant charter, President Akufo-Addo has saved the Ghanaian taxpayer an impressive US$468,000.00. That is equivalent to a staggering GHS3,306,139.20.”

“So, instead of doling out another colossal instalment of 3.3million Ghana Cedis to a European company, we get to keep it in Ghana, and hopefully, use it for something more prudent.”

While commending the president for the decision, Samuel Okudzeto Ablakwa, however, emphasized that Global Jet Luxembourg had recently informed their clientele including the presidency of the Republic of Ghana of an upward adjustment in the rate for the very much preferred LX-Dio owing to current global economic conditions.

“It is important to bear in mind that Global Jet Luxembourg, operators of the President’s favourite flying toy — the Boeing 737-97YER(BBJ3), registered LX-DIO, had earlier informed their clientele that due to prevailing global economic conditions, beginning this month of March, it would now cost approximately US$18,000.00 per hour, and no longer US14,000.00 to rent the ultimate flying symbol of obscene ostentation,” Mr Ablakwa wrote.

Describing the presidency’s decision as significant and refreshing, the North Tongu MP said he hopes the president’s use of commercial flight becomes permanent even if it means a refusal by the president to use the nation’s dedicated Presidential Jet.

“For the first time in about a year, the LX-DIO is resting at the Paris–Le Bourget Airport when its most devoted passenger is on official travels outside the African continent. This is why the latest conduct by President Akufo-Addo is both significant and most refreshing, as we pray it is not a fluke but a permanent change in conduct. Even if he refuses to use Ghana’s Presidential Jet, this option presents a more frugal alternative and may help remind Ghanaians that this is a president who once promised to protect the public purse,” he wrote.

While there has been continuous arguments and calls for the use of the presidential jet for the president’s foreign travels, the Ministry of National Security has vehemently argued that the decision solely borders on the safety and security of the president.

Meanwhile, the current government has announced plans to acquire a new plane for the purpose of a presidential jet.