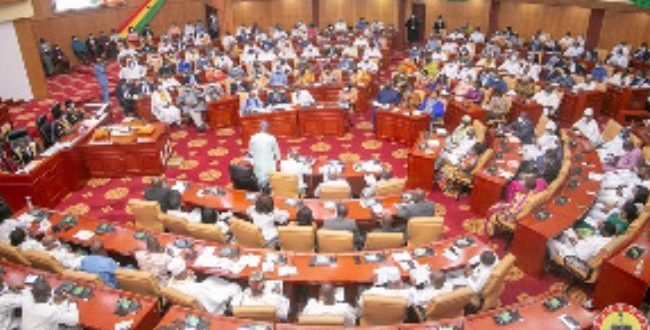 Share
We have never had our peace in this house ever since we had Supreme Court ruling, Minority

On Tuesday, March 23, parliamentary proceedings were suspended for thirty minutes for leadership to meet and solve the pending issues they have had after the Supreme Court gave a ruling that the Deputy Speaker has the right to vote while presiding.

For the past two weeks, the government’s business has been on hold as the Minority have always raised the issue of lack of quorum for decision making in the house which always leads to a suspension.

During Tuesday’s sitting, the minority again made an attempt to arrest a motion when a question was put before the House for the approval of a €20 million loan agreement between the Government of Ghana and the German Development Bank Group, Frankfurt am Main, to finance the Green Credit Line.

When the motion was put before the House on Tuesday, the MP for South Dayi Rockson-Nelson Dafeamekpor rose to draw the attention of the Speaker that the House did not have a quorum for decision making.

Joe Wise responds, directs House to vote: But the First Deputy Speaker, Joseph Osei-Owusu who was presiding as Speaker told the house that he had already informed the Clerk to make a headcount of people present before presenting the question before the house, adding that he had been informed that that members of the house were about 138 in number.

Joe Wise indicated that the ‘ayes’ had it after voting and therefore the loan agreement was approved. Dafeamekpor again objects to results from voting:

The process seemingly did not go down well for the minority as Dayi Rockson-Nelson Dafeamekpor stood up again to draw the attention of the Speaker whilst suggesting that the vote may be invalid considering the fact that quorum was not formed. He backed his arguments with Article 104 which indicates “Except as otherwise provided in this Constitution, matters in Parliament shall be determined by the votes of the majority of members present and voting, with at least half of all the members of Parliament present”.

He said at the time the decision was taken, the house had only 98 members of Parliament present not the numbers for decision making which should have been 138 or above.

Quoting from the Supreme Court in the case of Justice Abdulai versus the Attorney-General, Mr Dafeamekpor said: “Parliament is first and foremost, a deliberative Chamber, where members meet to debate and discuss various matters of public moment. For that deliberative function, when members are not yet called upon to vote to decide a matter (for example approve a contract or a bill), but merely to discuss or debate it, the Constitution per Article 102 sets a lower quorum threshold, that is one-third of the full membership of Parliament – not counting any member (Deputy Speaker) who may be presiding at that time”.

“However, where Parliament must exercise its legislative power to decide or determine a matter before it, the Constitution sets a higher quorum threshold, requiring, in that instance, at least half of all the Members of Parliament to be present before a vote can be taken.”

Mr Dafeamekpor said: “Mr. Speaker, I submit that at the time that the question was put and a voice vote was carried, we were 98 members in this chamber. 98. Mr Speaker in pursuant to this, I move that the decision we recently took is invalid. It’s invalid. Mr. Speaker, this is on grounds that there was lack of decision-making quorum.”

“Mr Speaker, I am, therefore, challenging the ruling that the “ayes” had the vote in pursuant to motion number 11. Mr. Speaker, I am further praying the House for a headcount in the matter.”

It was at this point that the Second Deputy Minority Chief Whip, Comfort Doyoe Cudjoe-Ghansah interjected and called for a suspension of the House for both parties to solve the issues before the House which have since been referenced to the Supreme Court ruling.

She said that there has not been peace in the house ever since Supreme Court gave a ruling.

She, therefore, advised the Speaker to adjourn sitting for both parties to meet to resolve the underlying issues that are affecting the business of the House.

The House was then adjourned and upon return, both parties moved away from the issues and continued with the proceedings of the House.

When the House resumed, Dr. Forson, who was the available Leader on the Minority side, said that in line with the decisions that they had reached at the conference meeting, the agreement was that the House should continue with the business of the day.

He said the Clerk had made it clear to them at the Conference Meeting that they had the numbers; more than half representing the 138 required to form the quorum; saying “we have no problem, if indeed, that was the case, the evidence was shown to us.

He however reiterated that minority would always raise the issue of quorum whenever the need be.

Watch the latest episode of The Lowdown below: