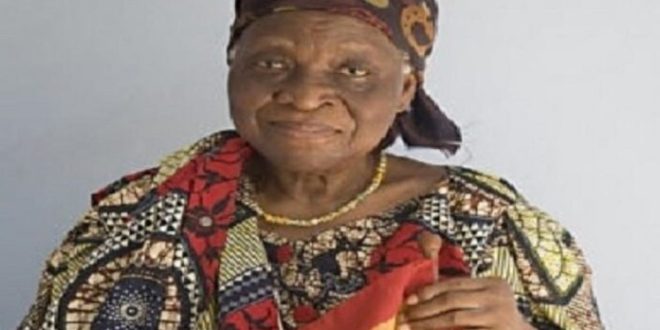 The Anum Traditional Council in Asuogyaman District has called on the government to construct a befitting monument in honour of the designer of the Ghana Flag, Theodosia Okoh, at Anum – her hometown.

The traditional council has bemoaned the failure by the state to erect a monument in the hometown of the late stateswoman as a remembrance of her contribution to national development.

Theodosia Salome Abena Kumea Asihene was born the eight child of her parents, on 13 June 1922, in Effiduase, in the Gold Coast. Her father was Reverend Emmanuel Victor Asihene( the first black moderator of the Presbyterian Church of Ghana) and her mother was Madam Dora Asihene.

Both were from Anum in the Asuogyaman district of the Eastern Region.

She attended Ashanti Efiduasi primary school, Basel Mission for her Middle school , later the Achimota school and finally the teacher training school in Agogo. She was trained for three years in fine art.

She got married to Enoch Kwabena Okoh the Head of Civil Service in the Kwame Nkrumah’s regime whom she had three children with.

Kwame Nkrumah chose her design out of those submitted, for the national flag of Ghana. Her design has been Ghana’s flag design since 6 march 1957.

Madam Okoh was the first female Chairperson of the Ghana Hockey Association.

The then District Chief Executive for Asuogyaman now Member of Parliament for the Area Thomas Ampem Nyarko together with the traditional Council erected a statue at the entrance of Anum Community as a memory.

Almost six years later the statue erected is deteriorating due to poor maintenance.

Residents are worried about the state of the statue.

Some of the residents bemoaned that the state has not done anything in the community in honour of the late designer of Ghana Flag.

Okogyeaman Nenye Kwasi Anyane, the Acting President of Anum Traditional Council who was out of town said in a telephone interview that apart from the hockey pitch in Accra named after the late Theodosia Okoh, there is no monument in her honour in her hometown.

He revealed that the state even failed to fulfil a financial pledge made to support the family during the funeral of the late Theodosia Okoh.

Okogyeaman Nenye Kwasi Anyane said the family paid for all cost incurred during the funeral without the contribution of the state.