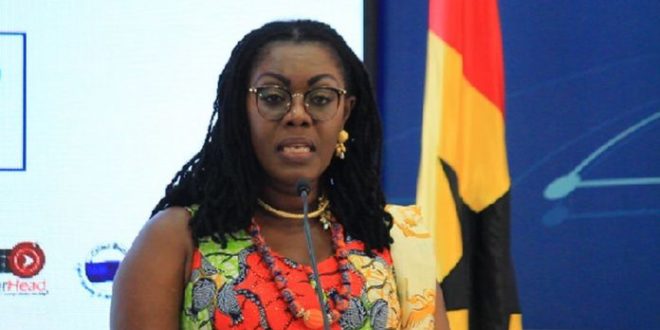 Cyber Security Law to be passed by June – Communications Minister

Minister of Communications, Ursula Owusu-Ekuful, has said that measures have been put in place for the enactment of a new cybersecurity law by June this year to sanitise and safeguard the country’s cyberspace.

The Communications Minister said the Ministry was currently in consultation with relevant stakeholders to solicit their inputs after which a bill would be drafted and tabled before parliament for consideration.

The law, she said, when passed would strengthen mandated state security agencies to make a request for personal details and phone records of individuals suspected of any cybersecurity breaches for further investigations.

The Minister said this in an interview with the media on the side-lines of a float organised by the Ministry of Communications and the National Cyber Security Centre in Accra, to create awareness on a safer internet usage, particularly among children and young people.

The float, organized with support from the United Nations International Children’s Emergency Fund (UNICEF) formed part of the Ministry’s prior activities to mark this year’s Safer Internet Day, which is commemorated on the 11th of February annually.

Mrs Owusu-Ekuful said “we have laws but we need to strengthen them. The Electronic Transactions Act for instance, contains a bit of security protection, and other international policies we have signed on to also demand that we strengthen our laws to protect our children in their interactions he internet and so by June this year, we are going to introduce new cybersecurity law that would contain provisions on a broader internet interactions to give the security agencies the power to obtain court order to demand for the phone records of persons suspected of breaking the law for further investigations.

“It is currently in the drafting stage and stakeholder consultations. We have done several consultations with the security services, key officials in public service, the judiciary, the Attorney General’s Office, prosecutions, among others.

“We have done a lot of stakeholder engagement and it is out there for people to bring their comments, we are collating all that and we hope that by June, that process of parliamentary approval would be complete and we can start implementing the law,” she added.

Touching on the Safer Internet Day, Mrs Owusu-Ekuful said her Ministry had for the past three years undertaken several outreach programmes to educate children on the functionalities of the digital devices such as the mobile phones and the computers they use, the beauty of online experience and the dangers lurking out there to ensure their protection and safety.

She said the Ministry had also put in place a point of contact to assist anyone, particularly children and young people who were unsure of any information they may come across on the internet.

While urging parents to take keen interest to protect their wards against cyber-attacks, the Minister also cautioned the children to be wary of information they divulge when interacting online, particularly with people who were unfamiliar to them in order to avoid falling victims to online criminal activities.

She also called on the National Cyber Security Centre to extend the publicity to other parts of the country to ensure it attained a national goal.

This year’s Safer Internet Day will be held on the theme: “Together For a Better Internet.”

Previous Be Fearless Like Jesus Christ…Stand For The Truth – Rawlings Urges
Next VIDEO: Watch horrifying moment Afghan woman was stoned to death (Graphic)