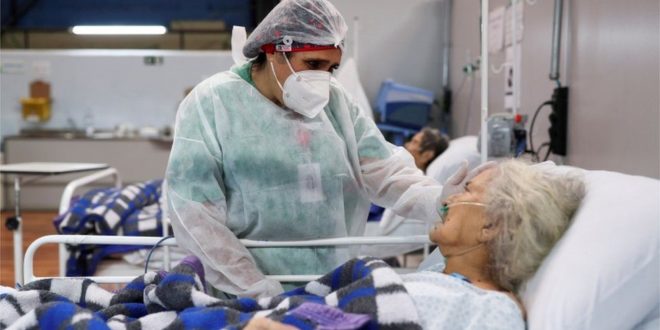 Health systems in most of Brazil’s largest cities are close to collapse due to Covid-19 cases, the country’s leading health institute warns.

More than 80% of intensive care unit beds are occupied in the capitals of 25 of Brazil’s 27 states, Fiocruz said.

Experts warn that the highly contagious variant in Brazil may have knock-on effects in the region and beyond.

The country has recorded more than 266,000 deaths and 11 million cases since the pandemic began.

Despite this, President Jair Bolsonaro has consistently opposed quarantine measures and expert advice on fighting coronavirus.

What’s the situation in Brazil?

According to Fiocruz, 15 state capitals have intensive care units (ICUs) that are at more than 90% capacity including Rio de Janeiro, Brasilia and São Paulo.

In its report, the institute warned that figures pointed to the “overload and even collapse of health systems”.

“The fight against Covid-19 was lost in 2020 and there is not the slightest chance of reversing this tragic circumstance in the first half of 2021,” Fiocruz’s Jesem Orellana said, quoted by AFP news agency.

“The best we can do is hope for the miracle of mass vaccination or a radical change in the management of the pandemic. Impunity in management seems to be the rule.”

On Tuesday, the country also recorded more than 70,000 cases, a 38% increase on last week, according to local media. The surge in cases has been attributed to the spread of a highly contagious variant of the virus – named P.1 – thought to have originated in the Amazon city of Manaus.

What do we know about the Brazil variant?

Preliminary data from the University of São Paulo, Imperial College London and Oxford University suggests the P.1 variant could be up to twice as transmittable as the original version of the virus.

It also suggests that the new variant could evade immunity built up by having had the original version of Covid. The chance of reinfection is put at between 25% and 60%.

Last week, the Fiocruz Institute said that P.1 was just one of several “variants of concern” that have become dominant in six of eight states studied by the Rio de Janeiro-based organisation.

“This information is an atomic bomb,” said Roberto Kraenkel, of the Covid-19 Brazil Observatory, told the Washington Post.

World Health Organization Director General Tedros Adhanom Ghebreyesus has described the situation in Brazil as “very concerning” and warned of a possible regional spill over.

“If Brazil is not serious, then it will continue to affect all the neighbourhood there and beyond.”

Will vaccines work against them?

Brazil has ordered more than 200m doses of the AstraZeneca and CoronaVac vaccine. So far, more than eight million people have had their first dose, representing just 4% of the population.

Current vaccines were designed around earlier versions of the coronavirus, but scientists believe they should still work against the variants, although perhaps not quite as well.

Fiocruz’s head of production, Mauricio Zuma, said on Monday that preliminary studies of the AstraZeneca vaccine showed it would protect against the P.1 variant. However, the Oxford team behind the vaccine earlier said it offers less protection – but should still protect against severe illness.

According to Reuters, another Brazilian study has indicated the CoronaVac vaccine, made by China’s Sinovac biopharmaceutical company, is effective against the same variant.

The Pfizer-BioNTech vaccine has been able to combat the Brazil variant, according to laboratory research published on Tuesday by the New England Journal of Medicine. Blood taken from people who had been given the vaccine “neutralised” an engineered version of the virus that contained the same mutations found in the Brazil variant.

However, the Pfizer vaccine has not yet been rolled out in the country, as the Brazilian authorities are still in negotiations with the company over its purchase. According to Reuters, Economy Minister Paulo Guedes said Pfizer had agreed to deliver 14m doses by June after a video call with President Jair Bolsonaro.

What is Brazil doing about the rise in cases?

Last week experts told Valor Economic newspaper that deaths would soon surpass 2,000 a day. They warned that the only way to avoid this was if the federal government took over national co-ordination of the fight against the virus, recommending lockdowns, the use of masks and a mass vaccination drive.

Since the start of the pandemic, President Bolsonaro has sought to downplay the threat posed by the virus.

Earlier this week he told people to “stop whining”. Speaking at an event, he said: “How long are you going to keep crying about it? How much longer will you stay at home and close everything? No-one can stand it any more. We regret the deaths, again, but we need a solution.”

A number of quarantine measures have been taken by mayors and regional governors, which Mr Bolsonaro has opposed, arguing that the collateral damage to the economy will be worse than the effects of the virus itself.