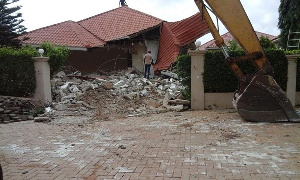 A real estate company, AD Construction Limited and its Chief Executive Officer (CEO), Alex Dautey have been sued at the Land Division of the Accra High Court for unlawfully causing the demolition of a three-bedroom house sold to Jerry Amesimeku, (plaintiff) for $200,000.00 in 2007.

The action filed by Theophilus Amesimeku, on behalf of Jerry Amesimeku, (per his lawful Attorney) who resides in the United Kingdom is asking for a compensation sum of $450, 000 from the estate developer for the demolition of his property without lawful authority.

AD Construction Limited and its CEO, Mr Dautey per the records has been in court once since 2016 when the action was initiated at the Lands Court over the matter. He was again absent when the matter was called in the court presided over by Justice Samuel Asare Nyarko.

In the witness statement before the court by the plaintiff (Theophilus Amesimaku) through his lawful attorney (Jerry Amesimeku), a brother and a businessman said to the best of his knowledge the 1st defendant is a Limited Liability Company while the 2nd defendant is the Chief Executive Officer (CEO), the company that deals in Real Estate.

The plaintiff currently lives in the United Kingdom and his given Theophilus the power of attorney to pursue the case.

According to the statement, sometimes in 2007 per an offer letter on February 16, 2007, the 1st defendant offered to sell an executive detached house consisting of a three-bedrooms, three-bathrooms, one-guest toilet, a living-room, kitchen and one car garage with one-bedroom outhouse (boys quarters) located on the Spintex Road, East Airport Accra commonly known as Genesis Estate to the plaintiff for the purchase price of $200, 000.00.

It stated that, the plaintiff accepted the offer and on April 5, 2008, he (plaintiff) has made a total payment of $140,000.00 as part payment to the 1st defendant to enable defendant complete the house and also to acknowledge receipt of the said payment by issuing an official receipt to that effect.

The statement explained that sometimes in October 2017 the house was completed and plaintiff was given the keys to take effective possession as owner.

It was also the case of the plaintiff that because he (plaintiff) did not have money to pay the balance of$60, 000.00 he approached Ghana Home Loans (GHL) Limited in 2008 for a loan and with the consent of the defendants he used the house as mortgage for the loan, which attracted an interest of 12% per anum.

According to the plaintiff, on August 20, 2008, a mortgage agreement was made between himself as the mortgagor (the borrower in a mortgage) and GHL Limited as the mortgagee, for the said loan of $60, 000.00 which agreement took effect from August 29, 2008 for a 15-year period.

It added that the house was built on a parcel of land covering an approximate area of 0,160 and measuring 70×100 feet more or less and situated at Genesis Estate, East Airport, Accra and numbered as G21. The current estimated value of the land the plaintiff understood it to be $160, 000, 00.

It explained that upon full payment of the purchase price of $200, 000.00 to the 1st defendant, it transferred its interest in the land together with the building numbered G21 to plaintiff per a sub-lease agreement made between AD Construction Limited, (1st defendant) and Theophilus Amesimeku, (plaintiff) on May 2, 2008 and stamped as LVB 24468/08.

“That even though the sub-lease agreement was prepared on the May 2, 2008, same was signed on the September 29, 2016 after full payment was made. Even though the loan amount was $60,000.00 charges such as preparation and registration of the mortgage agreement was added to the loan which brought the total sum to be paid to Ghana Home Loans to $7, 500.00.”

The statement added that the plaintiff has been servicing the loan by paying $810.00 per month representing interest and a component of the loan to GHL Limited since he secured the loan in August, 2008.

It said in 2013, the “plaintiff instructed defendants to look for a tenant to live in the house and so from January 2013, to November 2016, it was the 1st defendant through its Chief Executive Officer, Alex Dautey, 2nd defendant who received rent from the tenants without giving the said rent to plaintiff, claiming they used the money to renovate the house.

“That defendant took $1,200 per month from tenants who rented the fully furnished house from January 2013 to November 2016. The total rent defendants received during the said period amounted to $6, 400,” it stated.

On the use of rent money for renovation, it argued that “granted without admitting that defendants used the rent received to renovate the house, it is plaintiff’s case that the alleged renovation were needless or unnecessary since defendants knew they were going to unlawfully pull down the house away shortly thereafter.

The plaintiff claimed that, “it was a complete waste of money and it was a ploy to deprive plaintiff of the rent they received on his behalf,” adding that “when the last tenant vacated the house in November, 2016, plaintiff instructed defendants to hand over the keys to me (Jerry Amesimeku) to stay in the house but 2nd defendant kept on evading both plaintiff and myself until plaintiff became frustrated and instructed me to change the keys to the door which I did.”

The witness statement before the court stated that seven days after “I changed the locks and moved into the house, 2nd defendant without any authority from the plaintiff came to the house with macho men and forcibly removed me from the house and three my belongings outside and assaulted me severely.”

The incident it said was reported to the police at Manet Police Station but the police did not take any action until the December 10, 2016 when defendant caused the whole building to be demolished.

After the said unlawful demolition, it said the defendants purportedly wrote a letter dated December 12, 2016 to inform him that they have ‘exercised their right under the lease and terminated the agreement therefore the lease dated October 15, 2009 is accordingly forfeited.’

The plaintiff held that having made full payment of the purchase price of $200,000.00 to the 1st defendant in August 29, 2008 and the interest in the house transferred to plaintiff per a sub-lease agreement accordingly, “the purchase and sale transaction has been concluded long ago and therefore there was no existing agreement to be terminate or forfeited.”

The plaintiff contended that he is not aware of any agreement and /or lease entered on August 15, 2009 between himself and the defendants and is of the view that the said document referred to by the defendants is just a figment of defendants own imagination.

The demolition of the plaintiffs house by the defendants it said “was unlawful, unwarranted and without authority.”

In reaction to the statement of defence and counterclaim by the defendants, the Plaintiff stated that he is not aware of any payment of $40, 000.00 made by the defendants to GHL Limited to qualify him to obtain the loan.

“It is not true that defendants accounted for rent collected on behalf of plaintiff. 2nd Defendant claimed the rent was used to renovate the house which assertion the plaintiff describes as untrue.

Plaintiff contends that defendants pulled the building down to conceal the non-existing renovation while it is the case of the plaintiff that, the building was not sold and he remained the legitimate owner of the house till same was unlawfully pulled down

The plaintiff averred that “he had not breached of covenant in the sub-lease agreement and therefore any alleged forfeiture of the said sub-lease agreement was a nullity and that the defendants “have no right or authority to give him the opinion contained in their statement of defense as the property did not belong to them.