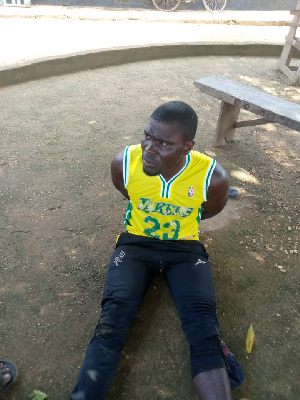 A 21-year-old truck pusher has been sentenced to a fine of GH¢1,200 by the Ofaakor Circuit Court for stealing iron rods worth GH¢1,050 at Kasoa.

Charged with unlawful entry and stealing, Mohammed Husein will serve a six-month jail term in default.

He was convicted on his own plea of guilty and was sentenced by the court presided over by Mr. Ebenezer Osei Darko.

Prosecuting, Chief Inspector Charles Annobil, said the complainant, Mr Eric Amo, and his brother, Mr. Kingsley Mamah, who is a witness in the case, bought some 16-millimetre iron rods and kept them in a room on their compound.

He said on Thursday, January 27, 2022, around 0100 hours, the accused sneaked into the room and stole seven iron rods but was unable to convey all at a go and left one of the metals about 60 metres away from the complainant’s house.

Chief Inspector Annobil said the complainant and his brother woke up around the same time and noticed the disappearance of the iron rods.

He said their search led them to the spot of the seventh iron rod left behind by the accused and, therefore, laid ambush to apprehend the culprit.

After a short while, Huseini showed up and was grabbed by the complainant who handed him over to the police, the Prosecutor added.

All the seven iron rods have since been retrieved.