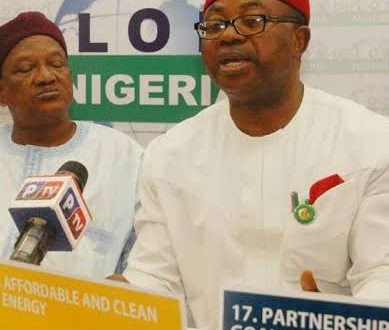 Onuigbo who made his opinion known during a paper presentation on the theme, “the role of Politicians/Political parties in the fight against Corruption and illicit Financial Flows” at the concluded one-day seminar for Professionals and non Professionals, organized by Society of Women Accountants of Nigeria (SWAN) which took place at ICPC Auditorium in Abuja.

It was contained in a release issued to newsmen on Wednesday.
He also maintained that the plugging of the massive leakage ocassioned by corruption and illicit financial flows is a necessary first step to follow, for a country desirous to sustaining its growths and development, hence the need on the african countries to muster the needed political will to fight and quell both menaces to foster sustainable development in economy, Infrastructure and other critical sectors.
Continuing, the federal lawmaker urged the governments in african countries to strengthen their policies and laws, as they would help check Illicit financial flows and corruption, including enactment of laws to protect whistleblowers, journalists, civil society, and even security agencies.
Onuigbo, who represents Ikwuano/Umuahia federal constituency of Abia State in the green chamber of National Assembly, further admonished the governments in black countries invest in technological development and its use to ensure effective and easily accessible data capture and dissemination.
According to the legislator in his words which partly stated, “with this understanding came the push for the strengthening of African democracies since strong democratic institutions are perceived as key in the fight against corruption.
“Since the turn of the millennium, conversation on corruption and the need to drive its drastic reduction in Africa have dominated the political and development space.
CLICK HERE TO DOWNLOAD PRESS RADIO MOBILE APP

“It is essentially believed that driving down corruption represents a necessary first step to integrated development of Africa. Africa countries must ensure its strengthening of regulatory agencies to ensure effective monitoring, arrest where necessary of culprits, and prosecution of offenders, as parts of steps in the fight corruption and against Illicit Financial Flows to guarantee sustainable development”.
source: thepressradio.com | Nigeria| Chijindu Emeruwa
Law makker NIGERIA 2022-08-17
admin
Share